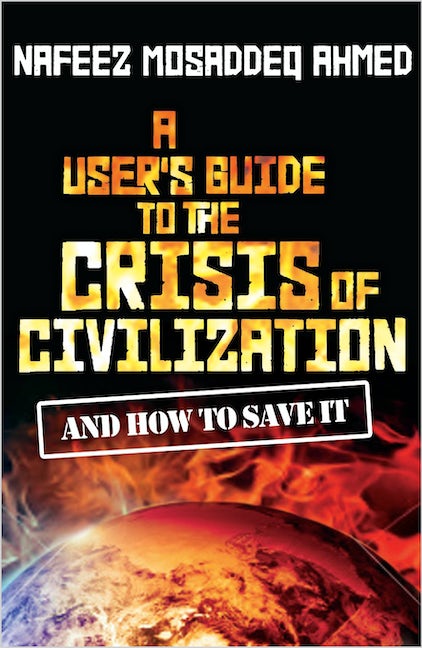 A User's Guide to the Crisis of Civilization

And How to Save It

Argues that the many world crises, including the financial meltdown, climate change and terrorism, are connected problems of a failing global system.
It often seems that different crises are competing to devastate civilisation. This book argues that financial meltdown, dwindling oil reserves, terrorism and food shortages need to be considered as part of the same ailing system.

Most accounts of our contemporary global crises focus on one area, such as climate change, or the threat of terrorism, to the exclusion of others. Nafeez Mosaddeq Ahmed argues that the unwillingness of experts to consider crises from an interdisciplinary perspective, has resulted in their failure to understand historical events. From ecology and the environment, to political governance, the global economy and international relations, Ahmed investigates contemporary crises, not as isolated events, but as trends and processes that belong to a single global system. Ahmed posits that we are therefore not dealing with a 'clash of civilisations', as Samuel P. Huntington argued. Rather, we are dealing with a fundamental crisis of civilisation itself.

Nafeez Mosaddeq Ahmed is Executive Director of the Institute for Policy Research and Development in London. He is the author of A User's Guide to the Crisis of Civilization (Pluto, 2010), The War on Truth: Disinformation and the Anatomy of Terrorism (2005) and Behind the War on Terror: Western Secret Strategy and the Struggle for Iraq (2003).

'Forceful, with particularly good sections on agribusiness, US policies of 'energy security', and what the author terms the 'securitisation' of ordinary life by Western governments' - Guardian 'This important analysis exposes vital truths and challenges much conventional wisdom. It deserves to be widely read' - Mark Curtis, Honorary Research Fellow, University of Strathclyde; former Head of Policy, Action Aid and Christian Aid; former Research Fellow, Royal Institute of International Affairs; author, Web of Deceit: Britain’s Real Role in the World and Unpeople 'Important ... the first book to systematically explore their interconnections and place them within a single comprehensive narrative. That makes it a very worthwhile read for policy-makers everywhere' - Rt. Hon. Michael Meacher MP, UK Minister of State for the Environment (1997-2003); Under-Secretary of State for Health and Social Security (1975-79); Under-Secretary of State for Industry (1974-75) 'Few thinkers weave as many threads into a tapestry as Nafeez Ahmed has done so superbly in this book' - Dr. Jeremy Leggett, UK Department of Trade & Industry’s Renewables Advisory Board (2002-2006); CEO, Solarcentury, member of UK Industry Taskforce on Peak Oil & Energy Security; author, Half Gone and The Carbon War 'Confronts the reader with the stark message that life as we know it is unsustainable' - Kees van der Pijl, Professor of International Relations, School of Global Studies, University of Sussex; Chair of Department of International Relations and Director of Centre for Global Political Economy (2000-2006); Leverhulme Major Research Fellow; auth 'A staggeringly comprehensive bird's-eye view of the gaping cracks that are appearing in global industrial civilisation' - Richard Heinberg, Senior Fellow, Post Carbon Institute; author, The Party’s Over, Powerdown and Peak Everything 'The clearest synthesis to date of the systemic problems facing human civilisation' - Jeff Vail, Former US Department of the Interior Counterterrorism Analyst; former US Air Force Intelligence Officer for global energy infrastructure; author, A Theory of Power 'In this magisterial exposition of the multiple intersecting challenges facing humanity in our century Nafeez Mosaddeq Ahmed points to real solutions' - David Schwartzman, Professor of Biology, Howard University, Washington DC; author, Life, Temperature and the Earth: the self-organizing biosphere
Preface and Acknowledgements
Introduction
1. Climate Catastrophe
2. Energy Scarcity
3. Food Insecurity
4. Economic Instability
5. International Terrorism
6. The Militarization Tendency
7. Diagnosis – Interrogating the Global Political Economy
8. Prognosis - The Post-Carbon Revolution and the Renewal of Civilization
Afterword
Notes and References
Index
Published by Pluto Press in Aug 2010
Paperback ISBN: 9780745330532
eBook ISBN: 9781849647915