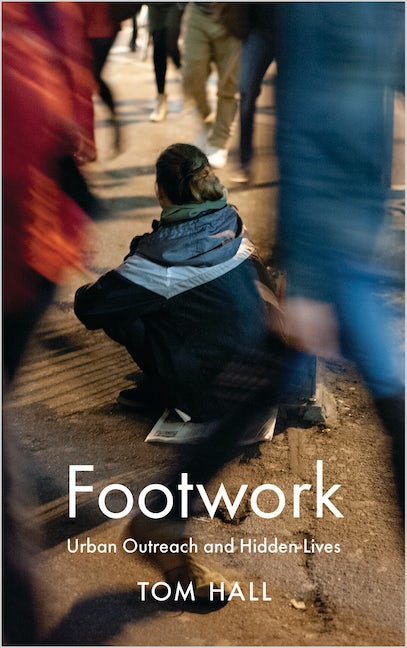 To create this anthropology of the modern British city, Footwork follows the work of a team of outreach workers in Cardiff, tasked to look out for the homeless and others similarly vulnerable, harried and exposed. Tom Hall’s fieldwork study encompasses aspects of urban geography, care work and street-level poverty, violence and isolation, this book reveals the stories of the vulnerable and isolated - people living in the city we often choose to ignore.

Tom Hall is Head of the School of Social Sciences at Cardiff University. He has served as the British Sociological Association (BSA) Treasurer and as Editor of the BSA's flagship journal, Sociology. He is also a Fellow of the Royal Anthropological Institute and a Fellow of the Wales Institute of Social and Economic Research Data and Methods. He is the author of Better Times Than This (Pluto, 2003) and Footwork (Pluto, 2016).

'A rare glimpse into the physical world and urban spaces of rough sleepers who live in the city though often unacknowledged. A sensitive and evocative account' - Professor Setha Low, City University of New York 'A brilliant, insightful and at times very funny portrait of hidden lives and those who care for them. This is a beautifully written and erudite book about city life that exudes a deep but irreverent sense of humanity' - Les Back, Professor of Sociology, Goldsmiths, University of London 'Combines extensive ethnographic research and scholarship, poetic writing and remarkable empathy to illuminate the lives of those who survive and sleep on city streets and to show brilliantly the mobile, skilful, humane ways in which care and outreach workers seek relate to and help them' - Professor Harry Ferguson, School of Sociology and Social Policy, University of Nottingham
Acknowledgements
Preface
1. Sleepwalking City
2. Lost and Found
3. First Aid
4. Round About
5. The Line Inside
6. Leftovers
7. Coming Across
8. Learning to See
9. Change Blind
Epilogue
Bibliography
Index
Published by Pluto Press in Dec 2016
Paperback ISBN: 9780745330570
eBook ISBN: 9781783717651

Tom Hall, author of Footwork: Urban Outreach and Hidden Lives reads an extract from the book, drawing on the themes of homelessness, urban regeneration, lost space and the 24-hour city.

END_OF_DOCUMENT_TOKEN_TO_BE_REPLACED
Back to Top
X