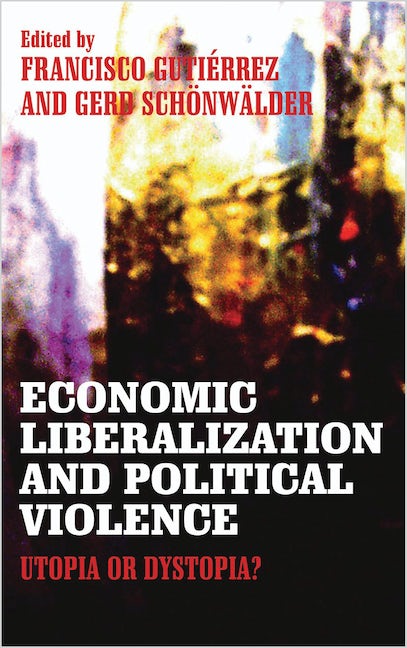 A comprehensive quantitative and qualitative study of the effect of neoliberalism on violent conflict and war-making.
Globalisation has spread neoliberal political economies worldwide, but is the globalising of this economic system a tool for spreading peace and prosperity, or a harbinger of conflict and war?

The authors examine the effect of neoliberalism on violent conflict and war-making in Sudan, the Ivory Coast, Peru and Colombia. Through quantitative and qualitative analyses they challenge advocates and opponents of neo-liberal reforms, revealing that the shift to neoliberal policies has produced widely diverging outcomes in different contexts; proving that the notion of global neoliberal homogeneity is flawed.

Francisco Gutierrez is researcher at the Instituto de Estudios Politicos y Relaciones Internacionales. He is the co-editor of Economic Liberalization and Political Violence: Utopia or Dystopia? (Pluto, 2010).

Gerd Schonwalder is the Director of Policy and Planning at IDRC, where he previously led the Peace, Conflict, and Development program. He is the co-editor of Economic Liberalization and Political Violence: Utopia or Dystopia? (Pluto, 2010).

'An important and original work ... essential reading for anyone who wishes to understand the dynamics of conflict and development in the 21st century' - James Putzel, Professor of Development Studies and Director of the Crisis States Research Centre, London School of Economics
Introduction
1. War, Peace and Liberalism: A Quantitative Approach to the Relation between Economic Globalisation and Armed Conflict
by Jairo Baquero Melo
2. Economic Liberalisation and Politics in Uganda by Frederick Golooba-Mutebi
3. Ivory Coast: The Political Economy Of A Citizenship Crisis by Richard Banégas
4. The Multiple Uses of Neo-liberalism
War, New Frontier and Reconfiguration of the State in Sudan by Roland Marchal and Einas Ahmed
5. Colombia: The re-structuring of violence by Francisco Gutiérrez Sanín
6. War and Neoliberal Transformation:The Peruvian Experience by Ramón Pajuelo-Teves
7. Conclusions by Gerd Schönwälder and Francisco Gutiérrez-Sanín
Index
Published by Pluto Press in Aug 2010
Paperback ISBN: 9780745330631