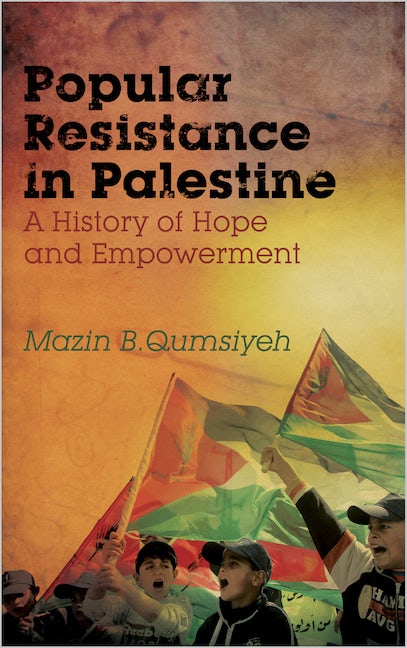 A History of Hope and Empowerment

by Mazin B. Qumsiyeh

Successes, failures, missed opportunities and challenges are chronicled through hundreds of stories from over 100 years of Palestinian resistance. The book critically and comparatively surveys uprisings under Ottoman rule, against the Balfour Declaration and the Oslo Accords, all the way up to the Boycotts, Divestments and Sanctions movement.

The compelling human stories told in this book will inspire people of all faiths and political backgrounds to chart a better and more informed direction for a future of peace with justice.

Mazin B. Qumsiyeh is a professor at Bethlehem and Birzeit Universities and works with a number of civil society organisations. He is the author of Popular Resistance in Palestine (Pluto, 2010) and Sharing the Land of Canaan (Pluto, 2004).

'Written with conviction and supported by extensive notes, this book should be required reading for the politicians who deal with peace in Palestine and the citizens who vote for them' - CHOICE 'This is a timely and remarkable book written by the most important chronicler of contemporary popular resistance in Palestine' - Nur Masalha 'Qumsiyeh's inspiring accounts of both the everyday and the most extraordinary acts of Palestinian indigenous resistance to colonialism expose the misguided claims that Palestinians have never tried nonviolence; in fact, they are among the experts, whose courage, creativity, and resilience are an inspiration to people of conscience everywhere' - Anna Baltzer, author of Witness in Palestine 'This sweeping account belongs on the bookshelves of Israelis who are fearful, Palestinians who are unsure of next steps, and a global community that has yet to take a meaningful stand for peace with justice. Anyone concerned about the future for all the peoples of the Middle East will take encouragement from his invigorating analysis' - Mary Elizabeth King, professor of peace and conflict studies, University for Peace, and author, A Quiet Revolution: The First Palestinian Intifada and Nonviolent Resistance
Preface
1. Introduction
2. What we want: Plurality, Justice, Human Rights
3. The Logic of Popular Resistance
4. Local Context of Popular Resistance
5. Popular Resistance during the Ottoman Rule
6. Balfour, Buraq, and Zionist Buildup (1917-1935)
7. The Great Revolt of 1936-1939
8. Devastation to Nakba 1939-1948
9. From Nakba to Naksa 1948-1967
10. One State of Oppression 1967-1986
11. Intifadat AlHijara 1987-1993
12. The Oslo Years and AlAqsa Intifada
13. Boycotts, Divestments and Sanctions
14. Conclusions and Outlook to the Future
Appendix. Examples of local popular resistance groups and organisations
Index
Published by Pluto Press in Nov 2010
Paperback ISBN: 9780745330693
eBook ISBN: 9781783714261