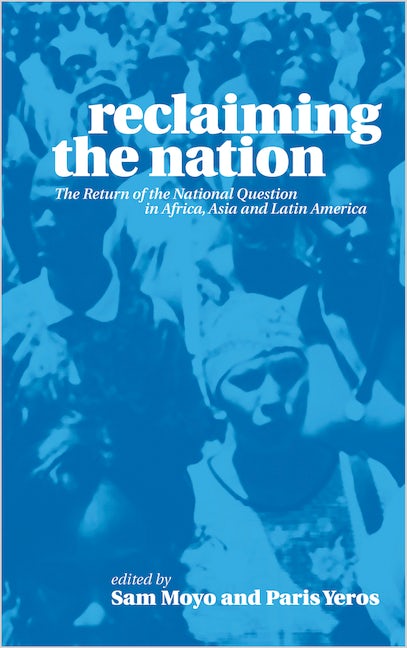 The Return of the National Question in Africa, Asia and Latin America

Sam Moyo and Paris Yeros bring together researchers and activists from the three continents to assess the state of national sovereignty and the challenges faced by popular movements today. They show that global integration has widened social and regional inequalities within countries, exacerbated ethnic, caste, and racial conflicts, and generally reduced the bureaucratic capacities of states to intervene in a defensive way. Moreover, inequalities between the countries of the South have also widened. These structural tensions have all contributed to several distinct political trajectories among states: from fracture and foreign occupation, to radicalisation and uncertain re-stabilisation.

This book redraws the debate on the political economy of the contemporary South and provides students of international studies with an important collection of readings.

Sam Moyo (1954-2015), was Executive Director of the African Institute of Agrarian Studies, Harare, Zimbabwe, and President of the Council for the Development of Social Science Research in Africa. He published extensively on land, agrarian and environmental issues, and served as director on various boards of research networks and institutes in Africa. Among his various books are the co-edited volumes Reclaiming the Land (Zed, 2005) and Reclaiming the Nation (Pluto, 2011).

Paris Yeros is Adjunct Professor of International Relations at the Catholic University of Minas Gerais, Belo Horizonte, Brazil, and Research Associate of the African Institute of Agrarian Studies. His books include the co-edited volumes Reclaiming the Land (Zed, 2005) and Reclaiming the Nation (Pluto, 2011).

'This book is about the new nationalist resurgence [against neo-liberalism]. It is the work of a committed and engaged scholarship, one which does not pretend to be neutral in the struggle between imperialism and the working people' - Issa Shivji, Mwalimu Nyerere University Professor, University of Dar es Salaam, Tanzania 'Provides essential clues to understand the present nature of the state in the periphery and to re-connect the South through all its dimensions' - Gladys Lechini, Professor of International Relations, National University of Rosario, Argentina 'Provides a holistic and systematic investigation of the relevance of the National Question in the contemporary South. It is one of the finest collections to engage with the relevant issues at the current juncture' - Praveen Jha, Centre for Economics Studies and Planning (CESP), Jawaharlal Nehru University (JNU), New Delhi, India
Preface
Introduction
1. The Fall and Rise of the National Question, by Sam Moyo & Paris Yeros
Part I: Africa
2. Rethinking Pan-Africanism, Nationalism and the New Regionalism, by Thandika Mkandawire
3. Nation-Building and State Fracture in Sudan, by Mahmood Mamdani
4. After Zimbabwe: State, Nation and Region in Africa, by Sam Moyo & Paris Yeros
Part II: Asia
5. Peripheral States in Asia under Neoliberalism and After, by Korkut Boratav
6. The National Question in India, by Sandeep Chachra
7. The Palestinian National Question: Settler-Colonialism and the International Power Regime, by Jamil Hilal
8. The National Question and the Unfinished Revolution in Nepal, by Hari Roka
9. Neoliberalism in Turkey, by Cem Somel
Part III: Latin America
10. Latin American Thinking on the State and Development: From Statelessness to Statelessness, by Atilio A. Boron
11. The National Question and the Autonomy of the State in Bolivia, by Lorgio Orellana Aillon
12. Kirchner’s Argentina: In Search of a New International Presence, by Javier A. Vadell
13. State and Nation in Brazil: Old Questions, New Challenges, by Sebastião C. Velasco e Cruz & Reginaldo C. Moraes
14. Cleavages in South America and the Role of Venezuela, by Rafael Villa
15. National States: Which Way Forward?, by Samir Amin
Notes on Contributors
Index
Published by Pluto Press in Mar 2011
Paperback ISBN: 9780745330822
eBook ISBN: 9781783718665