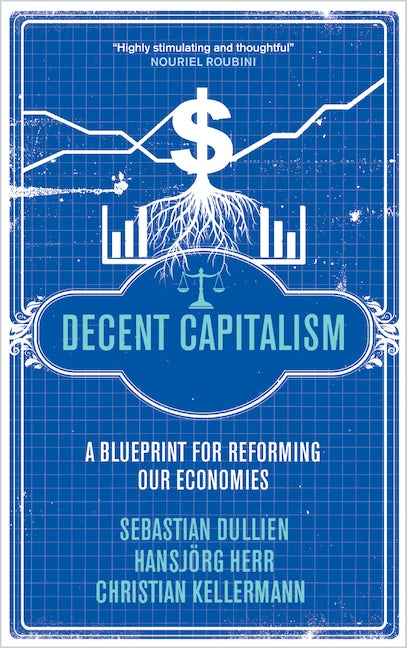 A Blueprint for Reforming our Economies

Sets out realistic alternatives to the neoliberal capitalism that caused the global crisis
The recent crisis, created by finance capitalism, has brought us to the economic abyss. The excessive freedom of international markets has rapidly transformed into international panic, with states struggling to rescue and bail out a globalised financial sector. Reform is promised by our leaders, but in governments dominated by financial interests there is little hope of meaningful change.

Decent Capitalism argues for a response that addresses capitalism’s systemic tendency towards crisis, a tendency which is completely absent from the mainstream debate. The authors develop a concept of a moderated capitalism that keeps its core strengths intact while reducing its inherent destructive political force in our societies. This book argues that reforming the capitalist system will have to be far more radical than the current political discourse suggests.

Decent Capitalism is a concept and a slogan that will inspire political activists, trade unionists and policy makers to get behind a package of reforms that finally allows the majority to master capitalism.

Sebastian Dullien is a senior policy fellow at European Council on Foreign Relations and a professor of International Economics at HTW Berlin, the University of Applied Sciences. He is the co-author of Decent Capitalism (Pluto, 2011).

Hansjorg Herr is a Professor at the Berlin School of Economics. He is the co-author of Decent Capitalism (Pluto, 2011).

Christian Kellermann is the Director of the Nordic Office of the Friedrich Ebert Foundation (FES) in Stockholm. He is the co-author of Decent Capitalism (Pluto, 2011).

'A highly stimulating and thoughtful proposal on how to stabilise the world economy and how to make financial crises less likely and less lethal in the future' - Nouriel Roubini, Professor of Economics and International Business,Stern School of Business, New York University 'An important contribution to the post-crisis economic literature which offers sensible, practical and distinctly non-utopian policy options. Whatever policy agenda is likely to emerge from the current financial mess, I would bet it will be based on the principles outlined in this book' - Wolfgang Münchau, associate editor of the Financial Times 'An outstanding book that gives a comprehensive, sensitive and thoughtful account of the crisis and presents a feasible model for a better world economy to benefit all the people. It should be compulsory reading for scholars and lay persons alike' - Yaga Venugopal Reddy, Emeritus Professor of Economics at the University of Hyderabad and Former Governor of the Reserve Bank of India 'Goes far far beyond the parameters of neoliberalism in providing the grounds for an egalitarian, partially regulated, green market economy. This book is definitely part of a new generation of economic thinking for the left that takes us forward' - Professor Colin Crouch FBA, University of Warwick Business School 'This is the kind of bold thinking we need today, if we are to match the challenges of our times' - Poul Nyrup Rasmussen, President, Party of European Socialists
Introduction
1. The Rise of Neoliberalism
2. Unleashing Financial Markets
3. Global Imbalances Fuel Global Instability
4. Labour in the Wake of Markets
5. The next stage of the crisis
6. Main Features of a New Economic Model
7. Strong Public Sector Balancing Markets
8. Revaluing Labour and Wages
9. Global Finances Need Global Management
10. A new growth paradigm
Conclusion: New Tale to Tell
Literature
Index
Published by Pluto Press in Mar 2011
Paperback ISBN: 9780745331096
eBook ISBN: 9781783716760