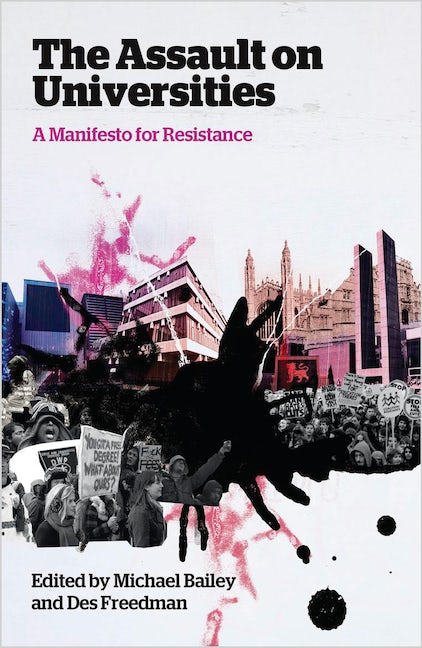 The Assault on Universities

A Manifesto for Resistance

Takes on the government's agenda of university cuts and fee increases
With funding cuts well under way and many institutions already promising to charge the maximum 9,000 pounds yearly tuition fee, university education for the majority is under threat. This book exposes the true motives behind the government's programme and provides the analytical tools to fight it.

Widespread student protests and occupations, often supported by staff, unions and society at large, show the public's opposition to funding cuts and fee increases. The contributors to this sharp, well-written collection, many of whom are active participants in the anti-cuts movement, outline what's at stake and why it matters. They argue that university education is becoming increasingly skewed towards vocational degrees, which devalues the arts and social sciences - subjects that allow creativity and political inquiry to flourish.

Released at the beginning of the new academic year, this book will be at the heart of debates around the future of higher education in the UK and beyond, inspiring both new and seasoned activists in the fight for the soul of our universities.

'The corporatising of universal education is one of the most insidious and dangerous attacks on the very notion of human rights. This book calls us to arms. Every student, every educator who cares should read it' - John Pilger 'This is an essential book. The future of our universities is up for grabs and the manifesto will play a huge role in providing alternatives at a time when the government says there aren't any' - Clare Solomon, President of the University of London Union (ULU) and editor of Springtime (2011) 'Universities are the new front line in the battle between the market and society. Students are being groomed for a life of debt on a learn-to-earn treadmill. Campuses are being commercialised at every turn. The Assault on Universities tells the story of what's happening to higher education, why and what we do about it' - Neal Lawson, chair of Compass and author of All Consuming 'A timely and astute defence of the university that breaks free from the unimaginative pattern that can see education as only either a corporate or a private good. The manifesto shows what can be done to revive and expand our universities restoring their social mission' - Professor Paul Gilroy, London School of Economics 'A valuable contribution to ongoing global conversations about the possibilities of social, political and economic justice and the central role of cultural institutions and practices, especially education, in them' - Lawrence Grossberg, Morris Davis Distinguished Professor of Communication Studies and Cultural Studies at the University of North Carolina at Chapel Hill
INTRODUCTION
1. An Introduction to Education Reform and Resistance by Des Freedman
Part 1: THE CHANGING IDEA OF THE UNIVERSITY
2. The Idea of the University by John K. Walton
3. What is a University Education For? by Neil Faulkner
4. Fighting for the University’s Life by Nick Couldry
Part II: CURRENT CHALLENGES AND FUTURE VISIONS
5. Economic Alternatives in the Current Crisis by Aeron Davis
6. Re-Imagining the Public Good by Jon Nixon
7. The War Against Democracy and Education by Nick Stevenson
Part III: CRITICAL PEDAGOGY
8. The University as a Political Space by Alberto Toscano
9. The Academic as Truth-Teller by Michael Bailey
10. Impoverished Pedagogy, Privatised Practice by Natalie Fenton
Part IV: STUDENT POLITICS
11. Students Revolts Then and Now by John Rees
12. The Politics of Occupation by Feyzi Ismail
13. Achievements and Limitations of the UK Student Movement by Ashok Kumar
Part V: INTERNATIONAL PERSPECTIVES
14. Beyond the Swindle of the Corporate University by Henry A. Giroux
15. Education Reforms in a European Context by Marion von Osten
16. International Students and the Globalisation of Higher Education by Kirsten Forkert
PART VI THE MANIFESTO
Demands on Government
Demands on Universities
Signatories to the Manifesto
Notes on contributors
Index
Published by Pluto Press in Aug 2011
Paperback ISBN: 9780745331911
eBook ISBN: 9781849646000

A New Assault on Universities:
A Manifesto for Resistance in COVID times

A manifesto and petition demanding radical new ways to save the higher education system in the UK.

END_OF_DOCUMENT_TOKEN_TO_BE_REPLACED
Back to Top
X