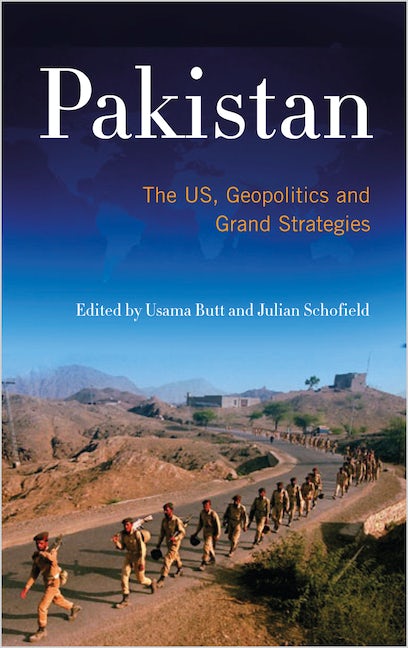 The US, Geopolitics and Grand Strategies

The killing of Osama Bin Laden highlighted the tense relationship between the US and Pakistani governments. This book considers the evolving nature of this relationship and Pakistan's place within the global order.

Whereas standard accounts focus on the US-Pakistan relationship in isolation, Pakistan: The US, Geopolitics and Grand Strategies provides a broader geopolitical perspective. It analyses Pakistan's relations with the US after a decade of the war on terror as well as Pakistan's regional relations, which provides the reader with a comprehensive understanding of Pakistan's interests.

Contributions from experts in both Pakistan and the West make this book vital reading for anyone seeking to understand this troubled nation.

Usama Butt is a London-based academic specialising in Pakistan and Islamism. He is the co-editor of Pakistan: The US, Geopolitics and Grand Strategies (Pluto, 2012) and Pakistan's Quagmire: Security, Strategy, and the Future of the Islamic-nuclear Nation (2010).

Julian Schofield is an Associate Professor of Political Science at Concordia University, Canada. He has been a key advisor to the Canadian government and intelligence services on Pakistan. He is the author of Militarization and War (2007).

'This deeply-researched, well-thought-out and comprehensive book makes an important contribution to our understanding of Pakistani policy and the vexed subject of US-Pakistani relations' - Anatol Lieven, Professor of War Studies at King's College London and author of Pakistan: A Hard Country

'This wide-ranging study by scholars from diverse backgrounds provides much-needed analysis of the wider context. It is a singularly valuable contribution to a field of study all too often dominated by a particular national orientation' - Paul Rogers, Professor of Peace Studies, University of Bradford

Preface
Introduction
Part I: Pakistan-US Relations
1. Changing dynamics: Islamic Orientation of the Pakistani State & the Islamic Reaction of the Masses, in the World of ‘Terror’, by Usama Butt
2. When Realities Collide: Differing U.S.-Pakistan Threat Perceptions, by Michael Rubin
3. The Influence of Domestic Politics on the Making of US-Pakistan Foreign Policy, by Mariam Mufti
4. Pakistan, Afghanistan & US: A Triangle of Distrust, by Nasir Islam
5. Pakistan's Quest for Security and Survival and US-Pakistan Relations, by Shamshad Ahmad
6. The Fallout of US Af-Pak Strategy on Current and Future US-Pak Relations, by Ishtiaq Ahmed
Part II: Pakistan’s Foreign Relations
7. China-Pakistan Relations and the War on Terror, by Julian Schofield
8. US-Pakistan Relations in Regional Perspective: Shifting Perspectives from the Arab-Gulf & the Role of the EU, by Christian Koch
9. Pakistan-Saudi relations: an Assessment, by Gawdat Bhagat
10. Pakistan & Iran: A Relation in search of meaning, by Harsh V. Pant
11. Nuclear Question: Nuclear Security and the US & Western Concerns, by Shaista Tabassum
Epilogue, by Usama Butt and Julian Schofield
Glossary
Index
Published by Pluto Press in Feb 2012
Paperback ISBN: 9780745332062
Hardcover ISBN: 9780745332079
eBook ISBN: 9781849646444