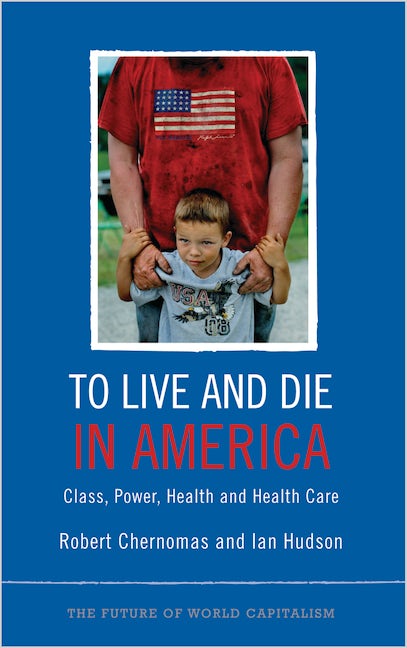 To Live and Die in America

by Robert Chernomas and Ian Hudson

Historical and political analysis of the impact of inequality and capitalism on the health of US workers.
Reviled as one of the worst healthcare providers in the world, the United States has among the worst indicators of health in the industrialised world, whilst paradoxically spending significantly more on its health care system than any other industrial nation.

Economists Robert Chernomas and Ian Hudson explain this contradictory phenomenon as the product of the unique brand of capitalism that has developed in the US. It is this particular form of capitalism that analogously created social and economic conditions that influence health, such as, highly industrialised labour that produced chronic disease amongst the labouring classes, alongside an inefficient, unpopular and inaccessible health care system that is incapable of dealing with those same patients. In order to improve health in America, the authors argue that a change is required in the conditions in the capitalist system in which people live and work, as well as a restructured health care system.

Robert Chernomas is Professor of Economics at the University of Manitoba, Canada. He is co-author (with Ian Hudson) of Economics in the Twenty-first Century: A Critical Perspective (University of Toronto Press, 2016) and To Live and Die in America: Class, Power Health and Health Care (Pluto Press, 2013).

Ian Hudson is Associate Professor of Economics at the University of Manitoba, Canada. He is the co-author (with Robert Chernomas) of Economics in the Twenty-first Century: A Critical Perspective (University of Toronto Press, 2016) and To Live and Die in America: Class, Class, Power Health and Health Care (Pluto Press, 2013).

'A fascinating account of how the strength of corporate interests and the relative weakness of unions have given the United States a bloated and inefficient health care system' - Dean Baker, co-founder of the Center for Economic and Policy Research, Washington DC 'Should be read by everyone who feels that power in the United States is very unevenly distributed, not only by gender and race, but primarily by class' - Vicente Navarro, Professor of Health and Public Policy, Johns Hopkins School of Public Health, and Editor-in-Chief of the Journal of International Health Services 'This timely exposé will strike a deep chord with the millions of Americans who live daily with health care insecurity' - Anne-Emanuelle Birn, Canada Research Chair in International Health at the University of Toronto and co-author of Global Health in a Dynamic World (2009). 'A cogent and penetrating analysis of health outcomes in America, outlining the historical role played by unions in contributing to public health services critical to all citizens. A must-read for all who embrace the goals for fairness shared by the 99 percent' - Paul Moist, National President, Canadian Union of Public Employees
1. Class, Power, Health and Healthcare
2. The Medical Miracle?
3. To Live and Die in 19th Century America: A Class Based Explanation of the Rise and Fall of Infectious Disease
4. Death in Our Times: The Exceptional Class Context for Chronic Disease in America
5. The Political Economy of US Healthcare: The Medical Industrial Complex
6. Three Easy Lessons
Notes
Index
Published by Pluto Press in Feb 2013
Paperback ISBN: 9780745332123
eBook ISBN: 9781849648431

Why do tired neoliberal economic policies, proven to be an abject failure, dominate the economic landscape?

END_OF_DOCUMENT_TOKEN_TO_BE_REPLACED
Back to Top
X