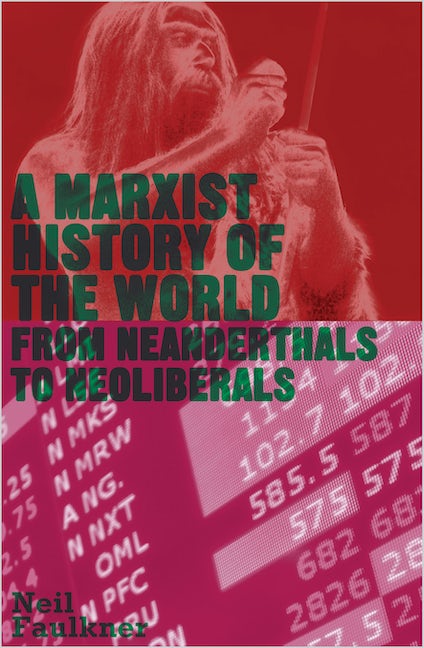 A Marxist History of the World

From Neanderthals to Neoliberals

Reading history against the grain, Neil Faulkner reveals that what happened in the past was not predetermined. Choices were frequent and numerous. Different outcomes - liberation or barbarism - were often possible. Rejecting the top-down approach of conventional history, Faulkner contends that it is the mass action of ordinary people that drives great events.

At the beginning of the 21st century - with economic disaster, war, climate catastrophe and deep class divisions - humans face perhaps the greatest crisis in the long history of our species. The lesson of A Marxist History of the World is that, if we created our past, we can also create a better future.

'Enlightening and apocalyptic in equal measure' - Guardian 'This book will make you stop and think and give you a taste of what it must have felt like to be a firebrand buoyed up by righteous revolutionary zeal in October 1917. If you like your blood boiled, this is the history for you' - Guy de la Bédoyère, historian and author of Roman Britain: A New History (2006).
Introduction: Why History Matters
1. Hunters and Farmers c. 2.5 million-3000 BC
The Hominid Revolution
The Hunting Revolution
The Agricultural Revolution
The Origins of War and Religion
The Rise of the Specialists
2. The First Class Societies c. 3000-1000 BC
The First Ruling Class
The Spread of Civilisation
Crisis in the Bronze Age
How History Works
Men of Iron
3. Ancient Empires c. 1000-30 BC
Persia: the Achaemenid Empire
India: the Mauryan Empire
China: the Qin Empire
The Greek Democratic Revolution
The Macedonian Empire
Roman Military Imperialism
The Roman Revolution
4. The End of Antiquity
c. 30 BC-AD 650
The Crisis of Late Antiquity
Huns, Goths, Germans, and Romans
Mother-Goddesses and Power-Deities
Judaism, Christianity, and Islam
Arabs, Persians, and Byzantines
5. The Medieval World
c. AD 650-1500
The Abbasid Revolution
Hindus, Buddhists, and the Gupta Empire
Chinese History’s Revolving Door
Africa: Cattle-Herders, Ironmasters, and Trading States
New World Empires: Maya, Aztec, and Inca
6. European Feudalism
c. AD 650-1500
The Cycles and Arrows of Time
The Peculiarity of Europe
The Rise of Western Feudalism
Crusade and Jihad
Lord, Burgher, and Peasant in Medieval Europe
The Class Struggle in Medieval Europe
The New Monarchies
The New Colonialism
7. The First Wave of Bourgeois Revolutions
1517-1775
The Reformation
The Counter-Reformation
The Dutch Revolution
The Thirty Years War
The Causes of the English Revolution
Revolution and Civil War
The Army, the Levellers, and the Commonwealth
Colonies, Slavery, and Racism
Wars of Empire
8. The Second Wave of Bourgeois Revolutions
1775-1815
The Enlightenment
The American Revolution
The Storming of the Bastille
The Jacobin Dictatorship
From Thermidor to Napoleon
9. The Rise of Industrial Capitalism
c. 1750-1850
The Industrial Revolution
The Chartists and the Origins of the Labour Movement
The 1848 Revolutions
What is Marxism?
What is Capitalism
The Making of the Working Class
10. The Age of Blood and Iron
1848-1896
The Indian Mutiny
The Italian Risorgimento
The American Civil War
Japan’s Meiji Restoration
The Unification of Germany
The Paris Commune
The Long Depression
11. Imperialism and War
1873-1918
The Scramble for Africa
The Rape of China
What is Imperialism?
The 1905 Revolution: Russia’s Great Dress Rehearsal
The Ottoman Empire and the 1908 ‘Young Turk’ Revolution
1914: Descent into Barbarism
Reform or Revolution?
The First World War
12. The Revolutionary Wave
1917-1928
1917: The February Revolution
Dual Power: The Mechanics of Revolution
February to October: The Rhythms of Revolution
1917: The October Insurrection
1918: How the War Ended
The German Revolution
Italy’s ‘Two Red Years’
World Revolution
The First Chinese Revolution
Revolts Against Colonialism
Stalinism: The Bitter Fruit of Revolutionary Defeat
13. The Great Depression and the Rise of Fascism
1929-1939
The Roaring Twenties
The Hungry Thirties
1933: The Nazi Seizure of Power
State Capitalism in Russia
1936: The French General Strike and Factory Occupations
The Spanish Civil War
The Causes of the Second World War
14. World War and Cold War
1939-1967
The Second World War: Imperialism
The Second World War: Barbarism
The Second World War: Resistance
The Cold War
The Great Boom
Maoist China
End of Empire?
Oil, Zionism, and Western Imperialism
1956: Hungary and Suez
Che Guevara and the Cuban Revolution
15. The New World Disorder
1968-present
The Vietnam War
1968
1968-75: The Workers’ Revolt
The Long Recession, 1973-92
What is Neoliberalism?
1989: The Fall of Stalinism
9/11, the War on Terror, and the New Imperialism
The 2008 Crash: From Bubble to Black Hole
The Second Great Depression
Conclusion: Making the Future