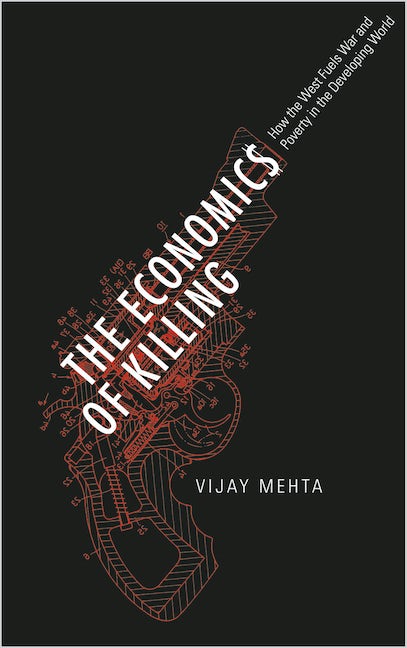 The Economics of Killing

How the West Fuels War and Poverty in the Developing World

Shows how Western governments are trapping the developing world in a cycle of violence and poverty.
Globalisation has created an interconnected world, but has not diminished violence, militarism and inequality. This book describes how the entrenched power of global elites has created a deadly cycle of violence, enacted through the Military Industrial Complex.

Vijay Mehta shows how attempts at peaceful national development, environmental sustainability and human rights are routinely blocked by Western powers. He locates the 2008 financial crisis in US attempts to block China's model of development. He shows how Europe and the US conspire with regional dictators to prevent countries from developing advanced industries, and how this system has fed terrorism.

The Economics of Killing argues that a different world is possible, based on policies of disarmament, demilitarisation and sustainable development.

Vijay Mehta is an author and peace activist. He is Chair of Uniting for Peace and founding trustee of the Fortune Forum charity. His books include The Fortune Forum Code: For a Sustainable Future (2006), Arms No More (2005), and The United Nations and Its Future in the 21st Century (2005).

'We live in a rich world and yet increasingly people are getting caught in the poverty trap and facing real hardship and pain. Vijay Mehta's excellent book sets out the problems and solutions, and challenges us all to create the spiritual and political will to implement policies which will bring about real change and give hope to humanity' - Mairead Maguire, Nobel Peace Prize Laureate 1976. Founder, Peace People, Belfast, Northern Ireland 'Brilliantly links the deepening economic crisis facing the West with the dynamics of militarism that is wreaking havoc on the planet' - Richard Falk, United Nations Special Rapporteur on Human Rights for the Palestinian Territories, Professor Emeritus of International Law at Princeton University, USA 'Shines a timely light on the role that Western Governments play in perpetuating conflict around the world' - Caroline Lucas, MP and Leader, Green Party, UK 'It is about time someone exposed the nefarious activities of the military-industrial complex. It has made killing a profitable industry. This book is a must read for all peace-seekers' - Arun Gandhi, Grandson of Mahatma Gandhi, President, Gandhi Worldwide Education Institute, Rochester, NY, USA 'Depicts ways in which the western powers can restructure their economies away from the reliance on the military industrial complex' - Deepak Chopra, Best-selling Author, “Peace is the Way”. California, USA 'Extremely timely and provides what is extremely important and must be underlined - not only excellent diagnosis but also appropriate treatments. And the first is to reduce the power of the military industrial complex' - Federico Mayor Zaragoza, Former Director-General UNESCO, President, Foundation Culture of Peace, Madrid, Spain Congratulations to Vijay Mehta on having grappled with this complex and too often sinister issue. It is a challenge to us all. Mehta helps us to face up to it' - Lord Frank Judd, Minister for Overseas Development (1976-1977), Minister of State for the Foreign and Commonwealth Office (1977-1979), Director of Oxfam (1985-91) London, UK 'This important book identifies the real crisis ahead for the world' - Tony Benn, former MP and Cabinet Minister, President, Stop the War Coalition, London, UK 'Exposes the reader to the vicious Northern military-industrial complex, and roles of the media and energy sectors, plus the corrupting role of the five permanent members of the UN Security Council in the profits of endless poverty' - Denis Halliday, UN Assistant Secretary General (1994-1998) and Former Coordinator of the UN Humanitarian Program in Iraq 'Lifts the curtain on a truth which many would prefer concealed. All those supporting humanitarian NGOs should read Mehta's book and act on it' - Bruce Kent, Vice President, Campaign for Nuclear Disarmament (CND), Movement for the Abolition of War. London, UK
Acknowledgement
Foreword
Introduction
Part I: Military Industrial Complex – Power, Myths, Facts and Figures
1. How the West’s Addiction to Arms Sales Caused the 2008 Structural Financial Crisis
2. What is the Military Industrial Complex?
3. The Culture of Militarism and Global North’s Power of Definition
4. Europe and the Remaking of the Middle East
Part II: Military Spending and Its Ill Effects
5. Negative Effects of Conflicts on Global, Human Security, Refugees, Forced Migrations and Urbanisation
6. War and its Ill Effects on Health, Environment and Development
Part III: The Folly of Chronic Wars – For Profit, Resources and Domination – More Weapons – More Wars – More Profits
7. Terrorism and Non-State Actors, and How to Make Them Stop
8. China's Periphery – The Military-Industrial Mess That Could Destroy a Bright Future
9. The Emerging Conflicts – Other Future Fault-lines of the World
Part IV: A New Vision, A New Beginning In A New Millennium – A Practical Way Of Reducing Arms, Armies And Wars For The Survival Of Humanity
10. Averting Disaster – What Type of Global Security Architecture Fits in Today’s World?
11. Replacing Military Industrial Complex – Making the 21st Century the Century of Soft Power
Epilogue: The Path Ahead
Notes
Index
Published by Pluto Press in Feb 2012
Paperback ISBN: 9780745332246
eBook ISBN: 9781849646475