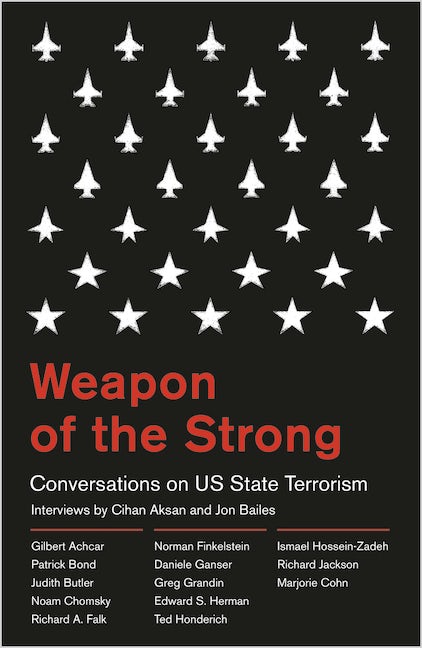 Weapon of the Strong

Conversations on US State Terrorism

Chomsky, Butler, Finkelstein and other leading commentators discuss state terrorism.
The term ‘terrorism’ is often applied exclusively to non-state groups or specific ‘rogue states’. Far less attention is given to state terrorism carried out or sponsored by democracies, most notably the United States. History shows that this state terrorism has been responsible for the deaths of millions of people.

Weapon of the Strong analyses the forms of US state terrorism through exclusive, never before published interviews with leading commentators and theorists, including Noam Chomsky, Edward S. Herman, Richard A. Falk, Judith Butler, Ted Honderich, Norman Finkelstein and Gilbert Achcar. The interviews explore the different aspects of state terrorism: its functions, institutional supports and the legal and moral arguments surrounding it, and consider specific case studies in Europe, Latin America and the Middle East.

Weapon of the Strong makes an indispensable contribution to contemporary debates on terrorism and constructs a damning critique of US foreign policy from World War Two to the present day.

Jon Bailes is a co-founding editor of the online political journal State of Nature.

Cihan Aksan is a co-founding editor of the online political journal State of Nature.