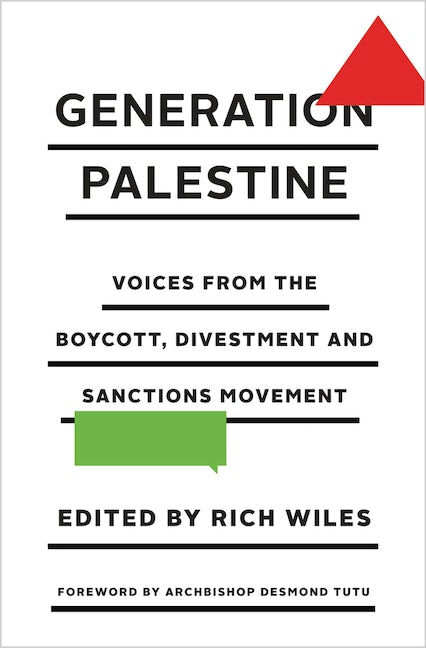 Voices from the Boycott, Divestment and Sanctions Movement

Brings together Palestinian and international activists in the Boycott, Divestment and Sanctions (BDS) movement.
The unique model of apartheid, colonisation and military occupation that Israel imposes on the Palestinians, along with myriad violations of international law, have made Palestine the moral cause of a generation. Yet many people continue to ask, 'what can we do?'

Generation Palestine helps to answer this question by bringing together Palestinian and international activists in the Boycott, Divestment and Sanctions (BDS) movement. The movement aims to pressure Israel until it complies with International Law, mirroring the model that was successfully utilised against South African apartheid.

Rich Wiles is a photographic artist, writer and activist, whose work has been widely exhibited internationally. His books include Behind the Wall (Potomac Books, 2010) and Generation Palestine (Pluto, 2013).

'Reading this book, talking about it and acting upon its ideas is a further political act against an injustice that has lasted a lifetime' - John Berger, author of Ways of Seeing 'The BDS movement is the most enlightened, imaginative, moral, fearless and dynamic blow for freedom I have known for many years. I believe it will be a vital factor in the liberation of Palestine. The inspiring voices in this book will help achieve that goal' - John Pilger 'Essential reading for all who believe in changing this world for the better. Never again should we ask 'What can we do?' Rich Wiles' excellent book, and the BDS movement, provide us with the answers' - Stephane Hessel is a diplomat, writer, concentration camp survivor, former French resistance fighter, and editor of the Universal Declaration of Human Rights in 1948.
Acknowledgements by Rich Wiles
Foreword by Archbishop Desmond Tutu
Part I: BDS: The Historical Context
1. BDS: Palestine's Global Battle that must be Won by Ramzy Baroud
2. Boycott, Bricks and the Four Pillars of the South African Struggle by Ronnie Kasrils
3. India's Freedom Struggle and Today's BDS Movement by Prabir Purukayathra and Ayesha Kidwai
4. The US Civil Rights and Black Liberation Movement: Lessons and Applications for the Palestinian Liberation Movement by Kali Akuno
Part II: The Palestinian Call for BDS
5. The 2005 Palestinian Call for BDS - Official Text of the BDS Call
6. Why Palestinians Called for BDS by Raji Sorani
7. Self-Determination and the Right of Return: Interlinked and Indivisible Rights by Nidal al-Azza 8. Levelling the Scales by Force: Thoughts on Normalisation by Rifat Odeh Kassis
9. International Law, Apartheid, and Israeli Responses to BDS by Richard Falk
10. Towards a Just and Lasting Peace: Kairos Palestine and the Lead of the Palestinian Church by Archbishop Atallah Hanna
Part III: Economy, Academia and Culture
11. BDS: Perspectives of an Israeli Economist by Shir Hever
12. Colonialism, the Peace Process and the Academic Boycott - Ilan Pappe
13. Faithless in the Holy Land: A Musician's Journey to Boycott by Dave Randall
14. Our People by Iain Banks
15. Why We Back the Boycott Campaign by Ken Loach, Paul Laverty and Rebecca O'Brien
Part IV: Activists and Activism
16. Derailing Veoli by Adri Nieuwhof
17. The Case of the Edinburgh 5 by Mick Napier
18. Worker to Worker Solidarity: BDS in the Trade Union Movement - Rafeef Ziadeh
19. The Derry versus Raytheon Struggle by Eamonn McCann
20. Israeli Apartheid Week: A Gauge of the Global BDS Campaign by Hazem Jamjoum
Part V: BDS - Yesterday, Today and Tomorrow
21. Palestine's South Africa Moment has Finally Arrived by Omar Barghouti
Notes on Contributors
Index
Published by Pluto Press in Mar 2013
Paperback ISBN: 9780745332437
eBook ISBN: 9781849647809