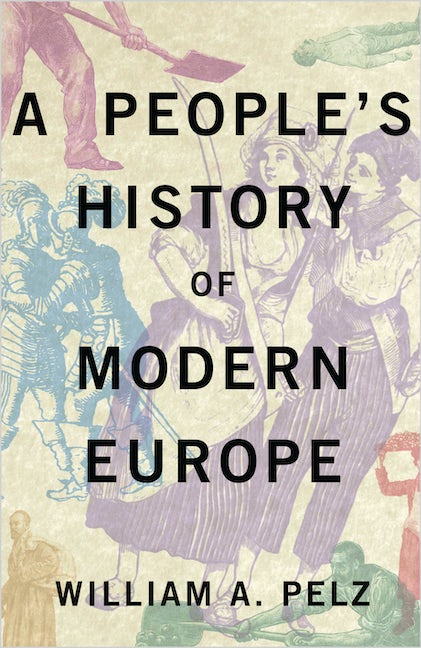 A People's History of Modern Europe

A history of Europe told from the perspective of its people, not its rulers.
From the monarchical terror of the Middle Ages to the mangled Europe of the twenty-first century, A People's History of Modern Europe tells the history of the continent through the deeds of those whom mainstream history tries to forget.

Europe provided the perfect conditions for a great number of political revolutions from below. The German peasant wars of Thomas Müntzer, the bourgeois revolutions of the eighteenth century, the rise of the industrial worker in England, the turbulent journey of the Russian Soviets, the role of the European working class throughout the Cold War, student protests in 1968 and through to the present day, when we continue to fight to forge an alternative to the barbaric economic system.

By focusing on the role of women, trade unions and students, this history sweeps away the tired platitudes of the privileged upon which our current understanding is based, providing an opportunity to see our history differently.

William A. Pelz (1951-2017) was Director of the Institute of Working Class History in Chicago and a Professor of History at Elgin Community College. His works include A People's History of the German Revolution, (Pluto, 2018) Wilhelm Liebknecht and German Social Democracy (Haymarket, 2015), The Eugene V. Debs Reader (Merlin Press, 2014) and A People's History of Modern Europe (Pluto, 2016).

'From the Peasants' Revolt of 1381 to the collapse of the Soviet Union, William A. Pelz presents a challenging alternative to the conventional narratives of European history' - Ian Birchall, author of The Spectre of Babeuf (London) 'A fascinating journey across centuries towards the world as we experience it today. it is the voice of the ordinary people, the less prominent figures, the women in particular, their ideas and actions, protests and sufferings that have gone into the making of this alternative narrative' - Sobhanlal Datta Gupta, former Surendra Nath Banerjee Professor of Political Science, University of Calcutta (India) 'This is a history of Europe that doesn't remove the Europeans. Here there are not only kings, presidents, institutions but the pulse of the people and social organisations that shaped Europe' - Raquel Varela, Universidade Nova de Lisboa (Portugal) 'This lively and engaging book is not the story of lords, kings and rulers. It is the story of the ordinary people of Europe and their struggles against those lords, kings and rulers, from the Middle Ages to the present day' - Francis King, editor, Socialist History 'An exception to the rule that the winner takes all in historiography' - Sjaak van der Velden, International Institute of Social History (Amsterdam) 'The focus not only makes history relevant for contemporary debates on social justice, it also urges the reader to develop a critical approach towards sources, always asking who is represented and who is lost' - Ralf Hoffrogge, Ruhr-Universität Bochum 'This book is a splendid antidote to the many European histories dominated by kings, businessmen and generals. It should be on the shelves of both academics and activists ... a lively and informative intellectual tour de force' - Marcel van der Linden, International Institute of Social History (Amsterdam) 'Well-written and engrossing' - Morning Star 'Gives an illuminating history of the class struggles and revolts which accompanied the modernisation of Europe' - Counterfire
Acknowledgements
Introduction
1. 'The King’s in His Castle... All’s Right with the World': The Collapse of the Middle Ages
2. 'The Other Reformation': Martin Luther, Religious Dogma and the Common People
3. 'The World Turned Upside Down': The Crisis of the Seventeenth Century and the English Revolution, 1640-49
4. The Rise of the Third Estate: The French People Revolt
5. Becoming an Appendage to the Machine: The Revolution in Production
6. From the Revolutions of 1848-49 to the First People's Democracy: The Paris Commune
7. The Rise of the Working Classes: Trade Unions and Socialism, 1871-1914
8. Protest and Mutiny Confront Mass Slaughter: Europeans in World War I
9. War Leads to Revolution: Russia (1917), Central Europe (1918-19)
10. Economic Collapse and the Rise of Fascism, 1920-33
11. Against Fascist Terror: War and Genocide, 1933-45
12. A New Europe? 1945-48
13. Europeans in the Cold War: Between Moscow and Washington
14. From the Berlin Wall to the Prague Spring: A New Generation of Europeans
15. Fighting for Peace in an Atomic Age, 1969-89
16. Europe Falls into the Twenty-First Century
Notes
Index
Published by Pluto Press in May 2016
Paperback ISBN: 9780745332451
eBook ISBN: 9781783717682

We at Pluto were deeply saddened to learn of the sudden death of author and comrade Bill Peltz. In his obituary, Patrick Quinn and Eric Shuster remember and celebrate their friend and colleague.

END_OF_DOCUMENT_TOKEN_TO_BE_REPLACED
Back to Top
X