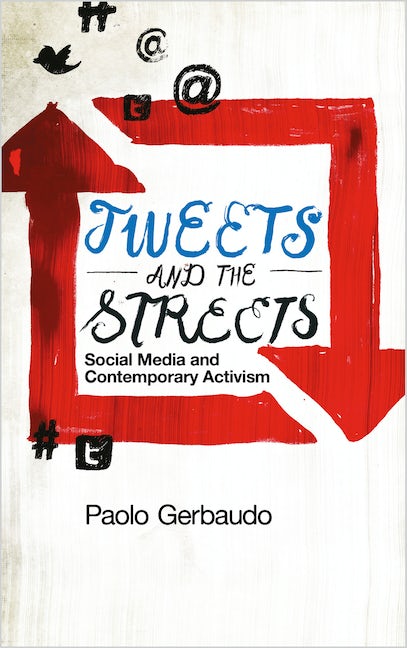 Tweets and the Streets

An exciting and invigorating journey through the modern politics of dissent

What should we make of the culture of the protest movements of the 21st century? From the Arab Spring to the 'indignados' protests in Spain and the Occupy movement, Paolo Gerbaudo examines the relationship between the rise of social media and the emergence of new forms of protest.

Gerbaudo argues that activists' use of Twitter and Facebook does not fit with the image of a 'cyberspace' detached from physical reality. Instead, social media is used as part of a project of re-appropriation of public space, which involves the assembling of different groups around 'occupied' places such as Cairo’s Tahrir Square or New York’s Zuccotti Park.

An exciting and invigorating journey through the new politics of dissent, he Streets points both to the creative possibilities and to the risks of political evanescence which new media brings to the contemporary protest experience.

'Very timely, not just in terms of addressing the impact of Web 2.0 on social movements and activism, but also in that it addresses and soberly assesses the use of technology from recent protests in North Africa and elsewhere'<br> - Stephen Duncombe, Associate Professor at the Gallatin School and the Department of Media, Culture and Communications of New York University and author of Dream: Re-Imagining Progressive Politics in an Age of Fantasy.

'Offers an incisive and challenging new direction in thinking about the context and possibilities for digital media and activism' - Joss Hands, author of @ is for Activism

'Gerbaudo's insightful observations and detailed empirical research contribute greatly to our understanding of the uses of social media in such movements' - John Sinha, International Socialism

Acknowledgements
Introduction
1. 'Friendly' reunions: Social media and the choreography of assembly
2. 'We are not guys of comment and like': The revolutionary coalescence of shabab-al-Facebook
3. We are not on Facebook, we are on the streets! The harvesting of indignation
4. The hash-tag which did (not) start a revolution: The laborious adding up to the 99%
5. Follow me, but don’t ask me to lead you! Liquid organising and choreographic leadership
Notes
Index
Published by Pluto Press in Oct 2012
Paperback ISBN: 9780745332482
Hardcover ISBN: 9780745332499
eBook ISBN: 9781849648011