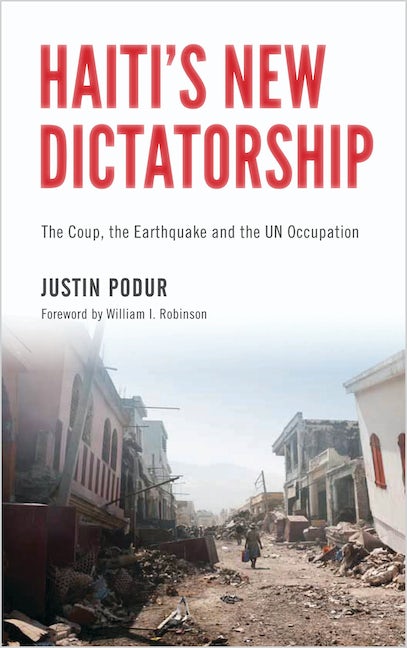 The Coup, the Earthquake and the UN Occupation

From coups to earthquakes, this is a history of a country denied its own freedom
In 1804 Haiti became the world's first independent black Republic following a slave revolution. 200 years later, ravaged by colonialism and violence, it was placed under UN military occupation.

Haiti's New Dictatorship charts the country's recent history, from the 2004 coup against President Aristide to the devastating 2010 earthquake, revealing a shocking story of abuse and indifference by international forces. Justin Podur unmasks the grim reality of a supposedly benign international occupation, arguing that the denial of sovereignty is the fundamental cause of Haiti's problems.

Justin Podur is Associate Professor of Environmental Studies at York University, Canada. He is a writer on political conflicts and social movements, and has reported from numerous countries including the Democratic Republic of the Congo, Pakistan, Haiti and Israel/Palestine. He is a contributor to Empire's Ally: Canadian Foreign Policy and the War in Afghanistan (2012).

'The UN occupation of Haiti promised to bring stability and democracy. Instead it has delivered cholera, rape and repression. With a sharp eye and a keener pen, Justin Podur expertly exposes the abuses the gang of nations that calls itself 'the international community' has inflicted on one of the world's poorest countries' - Greg Grandin, Professor of History at New York University 'The centuries-long torture of Haiti, and the courageous resistance of its people, is one of the most dramatic and compelling stories of modern history. It is vividly brought to life in this well-informed and highly illuminating study, which also provides valuable lessons about Haiti, about western power and ideology, and about prospects for justice and freedom in today's world' - Noam Chomsky, Institute Professor & Professor of Linguistics (Emeritus) at MIT 'A systematic analysis of the new regime of power that governs Haiti today, and reviews the crucial episodes of its recent history' - Peter Hallward, Professor of Modern European Philosophy at Kingston University and author of Damming the Flood: Haiti, Aristide, and the Politics of Containment (2007; 2011). 'A cogent antidote to the current confusion about Haiti' - Brian Concannon, Director of the Institute for Justice and Democracy in Haiti
Introduction
1. Historical Context - Haiti in the Americas from Independence to Today
2. Narratives, Media Strategies, and NGO Stories
3. The Coup Begins: 2000-2004
4. The Slaughter on US Watch: to June 2004
5. Internationalizing the Occupation: The summer 2004 Transition
6. Occupation Year Two - 2005
7. The Electoral Game of 2006
8. The Preval Regime 2006-2010
9. The Earthquake and Haiti's Politics of Disaster, 2010/11
10. The 2011 Elections and Michel Martelly
11. Conclusion – Replacing Dictatorship With Sovereignty
Acknowledgements
Notes
Index
Published by Pluto Press in Oct 2012
Paperback ISBN: 9780745332574
eBook ISBN: 9781849647830