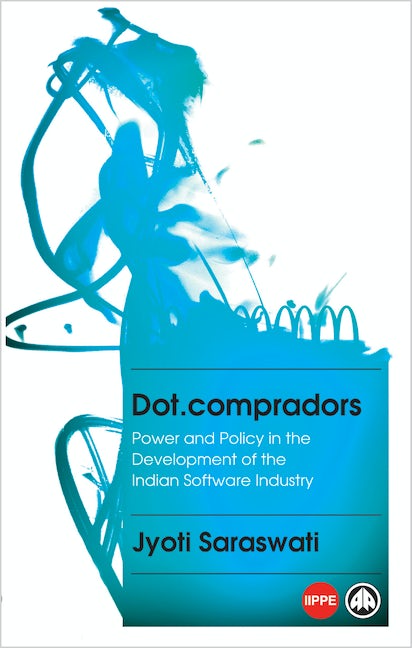 Power and Policy in the Development of the Indian Software Industry

Why the celebrated Indian IT industry is an obstacle to an egalitarian form of development in India
'India Shining' has become the brand name for a new India presented in Bollywood films, adverts and books. A key part of this image is the software industry, held up as the symbol of prosperity and post-modernity.

Dot.compradors reveals the darker reality behind 'India Shining', providing a history of the industry from the 1970s to the present. Jyoti Saraswati punctures the myth of a free-market industry by revealing the role of state intervention and how vested interests and elite corruption have shaped, and continue to shape, one of the world’s most dynamic sectors.

Saraswati argues that the interests attached to the software industry and the policies they are pursuing are both an impediment to the growth of local software firms and to a broader-based, more egalitarian form of development in India.

Jyoti Saraswati teaches on the Business and Political Economy Program at the Stern School of Business, New York University (NYU). He is the author of Dot.compradors (Pluto, 2012) and co-editor of Beyond the Developmental State (Pluto, 2013).

'This important book blasts open the myths about what is seen as the Indian economy's most successful sector' - Jayati Ghosh, Professor of Economics, Jawaharlal Nehru University, New Delhi 'A very important intervention. Saraswati's book fills a very important gap in the existing literature' - Chirashree Das Gupta, Associate Professor, Ambedkar University Delhi 'Provides a more nuanced understanding of the IT sector in India while also placing the evolution of that sector in the broader context of the country's political economy. Original in its scope, well written, and engaging' - Alessandra Mezzadri, Department of Development Studies, School of Oriental and African Studies (SOAS), University of London.
Preface
Acknowledgements
A Note on the Terminology
Glossary
List of Figures
A Primer: the Seven Leading Myths about the Indian IT Industry
1. Introduction
Part I: The Context
2. The Global Software Services Industry: An Overview
3. The Development of the Software Industry in India: Existing Explanations and their Shortcomings
4. The Political Economy of State Intervention and Industrial Transformation: An Analytical Framework
Part II: The Development of the Indian IT Industry
5. IT Started with a War
6. Catalytic Corruption: The Domestic Software Services Boom, 1978-1986
7. Manna from Heaven: Satellites, Optic Fibres and the Export Thrust, 1986-2000
8. Passage to India: The Giants in the Land of the Majors, 2000-2010
Part III: The Analysis
9. The Indian Mutiny: From Potential IT Superpower to Back Office of the World
10. Lessons from the Lies: What Does IT Mean?
11. Conclusion: Of Compradors and Useful Idiots
Notes
Appendices
Index
Published by Pluto Press in Jul 2012
Paperback ISBN: 9780745332659
eBook ISBN: 9781849647359