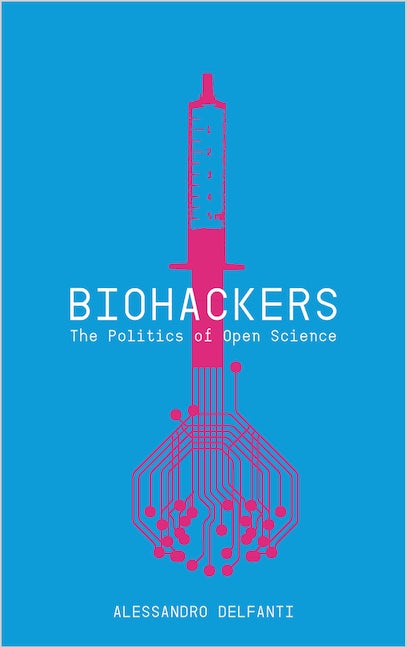 The Politics of Open Science

Biohackers looks at the emergence of the citizen biology community 'DIYbio', the shift to open access by the American biologist Craig Venter and the rebellion of the Italian virologist Ilaria Capua against WHO data-sharing policies.

Delfanti argues that these biologists and many others are involved in a transformation of both life sciences and information systems, using open access tools and claiming independence from both academic and corporate institutions.

'Hacking is now firmly entrenched in the world of biology. Alessandro Delfanti provides the definitive account covering the early, formative history of bio-hackers, a motley cohort of scientists, entrepreneurs, and amateur tinkers who are insisting on openness for their scientific enterprise' - Gabriella Coleman, Wolfe Chair in Scientific and Technological Literacy,McGill University and author of Coding Freedom: The Aesthetics and the Ethics of Hacking (2012). 'A deft and accessible introduction to the changing face of science in the new century. He brings a journalist's skill, a scientist's scepticism and an activist's passion to the question of open science today' - Christopher M. Kelty, Associate Professor of Information Studies and Anthropology, Institute for Society and Genetics, UCLA 'The biohackers are here. In this fascinating book, Alessandro Delfanti shows us how a new generation of scientists is breaking open the study of biology with the kinds of countercultural tools first used to hack the computer. Thanks to their work, science may never be the same again' - Fred Turner, Associate Professor of Communication, Stanford University
Preface
1. Cracking codes, remixing cultures
2. Forbidden, public, enclosed, open science
3. Hackers, rebels and profiteers
4. Sailing and sequencing the genome seas
5. Just another rebel scientist
6. We are the biohackers
7. Conclusions: how to hack biology
Notes
Bibliography
Index
Published by Pluto Press in May 2013
Paperback ISBN: 9780745332802
eBook ISBN: 9781849649070