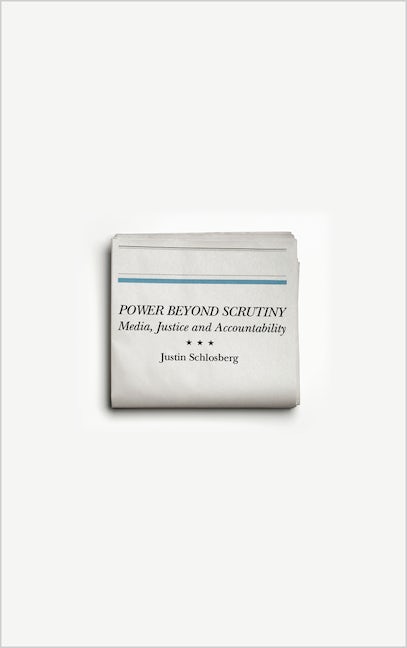 Revealing critique of the mainstream media - why it fails to challenge those in power and keeps silent on certain issues.
Power Beyond Scrutiny uncovers the forces which distort and limit public debate in the media. From the misuse of politicians' expenses to recent phone hacking scandals, establishment corruption has never been more in the headlines. Yet amidst the din there have been seismic silences.

Justin Schlosberg interrogates these silences - why did a plea bargain which allowed Britain's biggest arms company to escape bribery prosecution go almost entirely unchallenged in television news? Why did journalists routinely endorse the official explanation of how intelligence analyst David Kelly died, whilst ignoring the mounting evidence which undermined it? Why, in 2010, did broadcasters offer an unchallenged platform to critics of Wikileaks but not its supporters?

These are some of the questions and imbalances that Schlosberg seeks to address as he explains the nature of public debate in the digital age. In doing so he uncovers a range of news blockages that are more than just accidents of a fragmented, chaotic mediascape. They are ultimately ideological forces which ensure that contestability and dissent remain within definable limits.

'An illuminating and deeply disturbing book' - Phillip Knightley, author and journalist 'A book by one of the new generation's rising stars that examines the forces that limit investigative journalism' - Professor James Curran, Goldsmiths, University of London
Preface
Introduction
PART 1: COVERING CORRUPTION
1. High Crimes
2. Framing Foundations
PART 2: COVERING THE COVER UP
3. Whispers in the Press Gallery
4. The Basis of Belief
PART 3: COVERING THE LEAK
5. The Biggest Story on the Planet
6. Behind the Wall of Transparency
Conclusion
Notes
Bibliography
Index
Published by Pluto Press in Mar 2013
Paperback ISBN: 9780745332918
eBook ISBN: 9781849648714