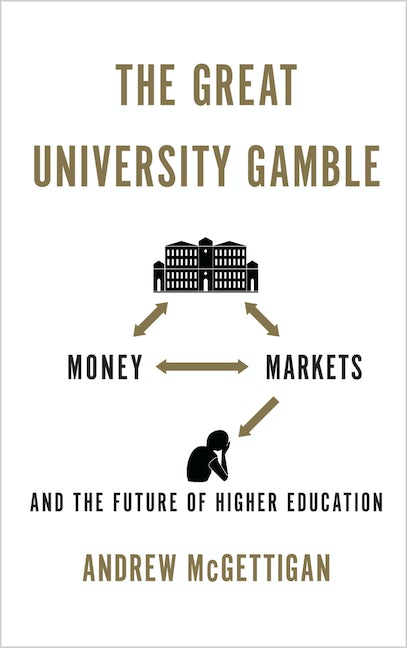 Money, Markets and the Future of Higher Education

A critical and deeply informed survey of the brave new world of UK Higher Education emerging from government cuts and market-driven reforms.

In 2010 the UK government imposed huge cuts and market-driven reforms on higher education. Proposals to raise undergraduate tuition fees lead to angry student-led protests. What will become of higher education under this new policy regime?

The Great University Gamble outlines the architecture of the new frontier for higher education, surveying the financial and policy details, Andrew McGettigan asks the big questions: What will be the role of universities within society? How will they be funded? What kind of experiences will they offer students? Where does the public interest lie? With privatisation infringing on our universities and colleges education is threatened with transformation from a public good into a private, individual financial investment.

Andrew McGettigan lives in London and writes on philosophy, the arts and education. He is the author of the report, False Accounting? Why the Government's Higher Education Reforms don't Add Up ( Intergenerational Foundation report, 2012) and the book The Great University Gamble (Pluto, 2013).

'In the 1960s student activists argued that books are weapons. Today, student activists and trade unionists require an arsenal of weapons to fight back against the Tories' assault on higher education. Andrew McGettigan offers just that'<br> - Mark Bergfeld, NUS National Executive and spokesperson for the Education Activist Network

'Andrew McGettigan is one of the most respected and incisive commentators on higher education. There are no other texts at present that address the political economy of higher education and none that put all the pieces of the jigsaw together to reveal the picture with such clarity' - John Holmwood, Professor of Sociology, Faculty of Social Sciences, University of Nottingham, co-founder of the Campaign for the Public University and editor of A Manifesto for the Public University (2011)

'Whether you agree or disagree with him, Andrew McGettigan's critique of the Government's higher education policies is essential reading. He brings a unique perspective to the debate, which is all the richer for it' - Shabana Mahmood, Shadow Minister of State for Higher Education

'What a splendid book, bang up-to-date and comprehensive. Anybody wanting to understand the present UK policy framework and wanting to have a critical account of it could not do better than start with this book; and so engagingly presented and written too. It deserves to be a winner' - Ron Barnett, Emeritus Professor of Higher Education, Institute of Education, University of London.

'Andrew McGettigan is in my opinion by far the most knowledgeable person in the country on the government's obscure and yet revolutionary programme of change for universities. Essential and deeply worrying reading' - Simon Szreter, Professor of History and Public Policy, University of Cambridge

'This is a must-read book for those who work in higher education and are interested in current education policies' - Samantha A. Shave, Journal of Social Policy