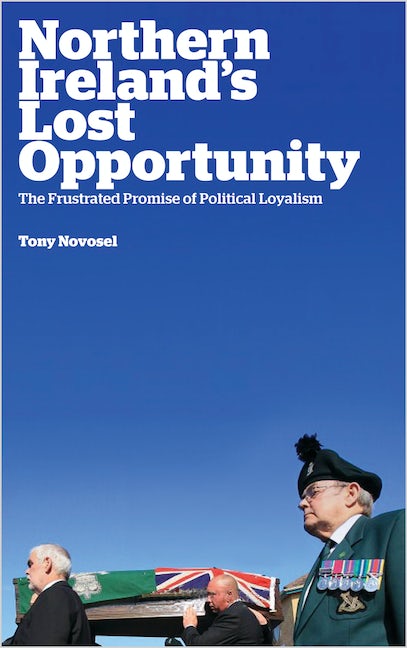 The Frustrated Promise of Political Loyalism

In an unorthodox account, that disputes the idea that loyalism was apolitical and sectarian, Tony Novosel argues that loyalist groups, seen as implacable enemies by Republicans and the left, developed a political analysis of the Northern Ireland conflict in the 1970s which involved a compromise peace with all political parties and warring factions - something that historians and writers have largely ignored.

Distinctive, deeply informed and provocative, Northern Ireland's Lost Opportunity is the first study to focus not on the violent actions of the UVF/RHC but on their political vision and programme which, Novosel argues, undeniably contributed to the Conflict Transformation Process, by upholding the potential for a viable peace based on compromise with all groups, including the Irish Republican Army.

Tony Novosel is a senior lecturer in History at the University of Pittsburgh. He is involved in 'common history' projects in Belfast and is the author of Northern Ireland's Lost Opportunity (Pluto, 2013).

'A significant contribution. Exposes the limitation of commonly held views that loyalism was apolitical and merely sectarian' - Professor Peter Shirlow, School of Law, Queen’s University Belfast 'Novosel's study of the UVF and its attempts to develop a politicised loyalism challenges the standard one-dimensional representation of loyalism that so dominates the media and popular imagination' - Graham Spencer, Reader in Politics, Conflict and the Media at the University of Portsmouth, UK and author of The State of Loyalism in Northern Ireland. 'Integral to an understanding of the Conflict Transformation Process which has made Northern Ireland a beacon of hope, and adds a vital component to the complex narrative of our recent history' - Dr John Kyle, Progressive Unionist Party, Belfast City Councillor 'Novosel effectively challenges common perceptions. He demonstrates that some Loyalists offered hope when hope was most needed but faced constant obstruction by those challenged by their 'new thinking' - Roy Garland, Irish News
Abbreviations
Glossary Of Terms
Acknowledgements
Preface And Overview
Introduction
1. The Ulster Volunteer Force And O’Neill
2. Manipulation, Acquiescence And Awakening
3. The Prison Experience And Loyalist Politics
4. The Emerging Light: Political Loyalism, 1973-1975
5. Darkness At The End Of The Tunnel: The Failure Of Politics
6. The Light In The Darkness: Political Loyalism, 1975-1977
7. Sharing Responsibility: 1977-1987
Conclusion
Bibliography
Index
Published by Pluto Press in Jan 2013
Paperback ISBN: 9780745333090
eBook ISBN: 9781849648073

Who are the DUP?

What are the historical circumstances from which the DUP were formed? What will this coalition mean for Tory policy? What does it mean for power-sharing in Northern Ireland?

END_OF_DOCUMENT_TOKEN_TO_BE_REPLACED
Back to Top
X