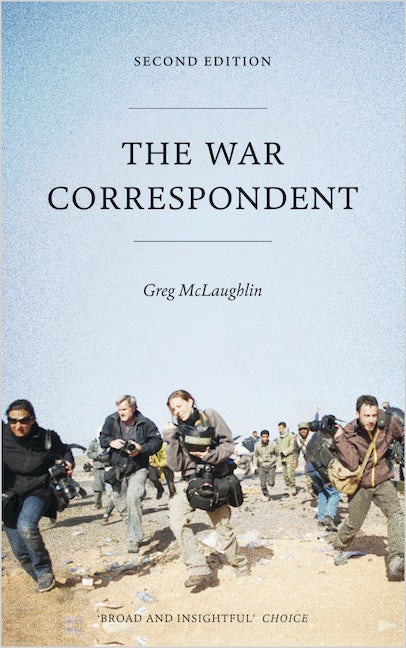 A critical analysis of war reporting, perfect for aspiring journalists
What is the role of the war reporter today? Through interviews with prominent war and foreign correspondents such as John Pilger, Robert Fisk, Mary Dejevsky and Alex Thomson The War Correspondent delves into the most dangerous form of journalism.

From Crimea to Vietnam, the Falklands to the Gulf and Afghanistan, Iraq and the War on Terror, the books examines the attractions and risks of war reporting; the challenge of objectivity and impartiality in the war zone; the danger that journalistic independence is compromised by military control, censorship and public relations; as well as the commercial and technological pressures of an intensely concentrated, competitive news media environment.

As history and ideology return to the reporting of international conflict, Greg McLaughlin asks what will that mean for a new generation of war correspondents, attuned not to history or ideology but to the politics of the next conflict.

'At a time of heightened geopolitical tension, McLaughlin's study of the war correspondent is an important contribution to understanding the role of the journalist in war time. This revised edition is essential reading for students and researchers of conflict news' - Professor Brian McNair, Research Leader in Media at QUT, and author of 'Journalism and Democracy' (Routledge, 2000) 'An excellent book which offers an authoritative analysis of the institutional and political pressures on news reporting of war and combines this with the accounts of journalists who reflect upon and explain these relationships' - Greg Philo, Glasgow Media Group 'Useful and insightful suggestions on how the always-tense relationship between fighting forces and reporting media can be made more productive and efficient' - Choice 'A serious study getting to grips with the theory and practice of this intrepid species focusing on the reportage of conflicts from Crimea to Korea, Vietnam, Kosovo' - Books Ireland
Acknowledgements Abbreviations
1. Introduction
Part I: The War Correspondent in Historical Perspective
2. The War Correspondent: Risk, Motivation and Tradition
3. Journalism, Objectivity and War
4. From Luckless Tribe to Wireless Tribe: The Impact of Media Technologies on War Reporting
Part II: The War Correspondent and the Military
5. Getting to Know Each Other: From Crimea to Vietnam
6. Learning and Forgetting: From the Falklands to the Gulf
7. Goodbye Vietnam Syndrome: The Embed System in Afghanistan and Iraq
Part III: The War Correspondent and Ideological Frameworks
8. Reporting the Cold War and the New World Order
9. Reporting the ‘War on Terror’ and the Return of the Evil Empire
10. Conclusions: ‘Telling Truth To Power’ – the Ultimate Role of the War Correspondent?
Appendices
Notes
Bibliography
Index