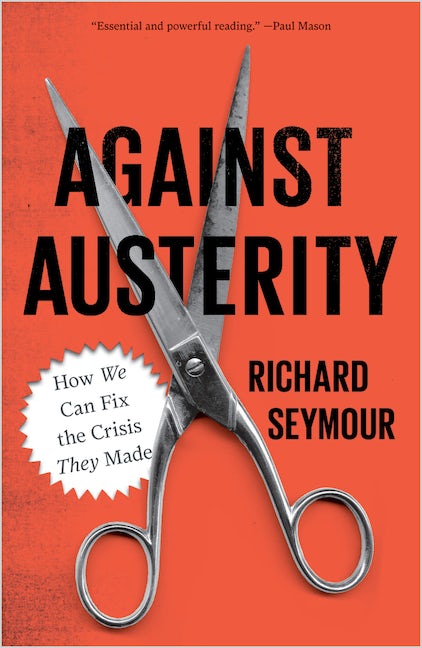 How we Can Fix the Crisis they Made

A blistering, accessible and invigorating polemic against the current political consensus.
Five years into capitalism's deepest crisis, which has led to cuts and economic pain across the world, Against Austerity addresses a puzzling aspect of the current conjuncture: why are the rich still getting away with it? Why is protest so ephemeral? Why does the left appear to be marginal to political life?

In an analysis which challenges our understanding of capitalism, class and ideology, Richard Seymour shows how 'austerity' is just one part of a wider elite plan to radically re-engineer society and everyday life in the interests of profit, consumerism and speculative finance.

But Against Austerity is not a gospel of despair. Seymour argues that once we turn to face the headwinds of this new reality, dispensing with reassuring dogmas, we can forge new collective resistance and alternatives to the current system. Following Brecht, Against Austerity argues that the good old things are over, it's time to confront the bad new ones.

Richard Seymour is an emerging voice on the radical left, providing expert analysis on British politics across international media. He co-founded the magazine Salvage, a quarterly of revolutionary arts and letters, and has authored numerous books. He is the author Against Austerity: How we Can Fix the Crisis they Made (Pluto, 2014), Corbyn: The Strange Rebirth of Radical Politics (Verso, 2016), Unhitched: The Trial of Christopher Hitchens (Verso, 2013) and The Liberal Defence of Murder (Verso, 2012).

'Essential and powerful reading' - Paul Mason, Culture and Digital Editor of Channel 4 News and author of 'Why It's Kicking Off Everywhere' (Verso, 2012) 'As so-called 'austerity' continues its rampage, it's patently obvious that it can't fix the economy. So why have the ConDems stuck with it? Eschewing the comforting liberal critique that it's all a mistake, mere economic illiteracy, Seymour incisively uncovers just what kind of strategy austerity really is: its aims, its methods, its victims - and how to fight it' - China Miéville 'A readable and useful guide to the interrelationship between austerity, neoliberalism, and the state at the level of strategy and ideology... The book has much to offer in terms of a sober and nuanced analysis. This goes especially in the UK where the trend towards nostalgia, wishful thinking, and resisting empirical and strategic reconsideration is so strong' - Matthijs Krul, The North Star 'An excellent and accessible critique of austerity — how it relates to class, the state and ideology — and advocates new types of organisation and resistance to it' - Dan Smith, Morning Star 'A must-read primer for old hands in the class struggle and newcomers alike' - Louis Proyect, Counter Punch 'This book is a powerful beginning, a crucial reference point for any left analysis of the anti-austerity struggle' - Alan Sears, New Socialist Webzine 'A timely book that will appeal to informed, intellectually-minded activists' - Ian Sinclair, Peace News
Preface
Acknowledgements
Introduction: The Bad News Gospel
1. Class
2. State
3. Ideology
Conclusion: Strategy
Index
Published by Pluto Press in Mar 2014
Paperback ISBN: 9780745333281
eBook ISBN: 9781783710201

END_OF_DOCUMENT_TOKEN_TO_BE_REPLACED
Back to Top
X