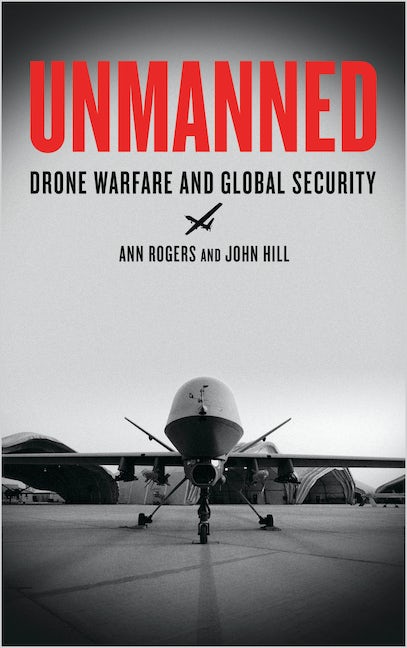 by Ann Rogers and John Hill

Shows how unmanned systems are changing not simply how wars are fought, but the meaning of conflict itself.
Drones have become the controversial new weapon of choice for the US military abroad. Unmanned details the causes and deadly consequences of this terrifying new development in warfare, and explores the implications for international law and global peace.

Ann Rogers and John Hill argue that drones represent the first truly globalised technology of war. The book shows how unmanned systems are changing not simply how wars are fought, but the meaning of conflict itself.

Providing an unparalleled account of new forms of 21st century imperial warfare, Unmanned shows how drone systems dissolve the conventional obstacles of time and space that have traditionally shaped conflict in the international system. It considers the possibility that these weapons will become normalised in global conflict, raising the spectre of new, unpredictable and unaccountable forms of warfare.

John Hill is the co-author of Unmanned: Drone Warfare and Global Security (Pluto, 2014) and was formerly the China Watch editor for Jane's Intelligence Review.

'Important and engaging ... A very readable overview of the issues surrounding the growing use of armed unmanned systems' - Peace News
Abbreviations
Introduction
1. From Balloons to Big Safari: UAV Development
2. The Drone Takes Off
3. The UAV and Military Doctrine
4. The Consequences of Killing without Consequences
5. Targets: The View from Below
6. Unlegal: Justifying a Drone War
7. Killer Robots
8. From Man O’War to Nano-War: Revolutions in Military Affairs
Notes
Bibliography
Index
Published by Pluto Press in Apr 2014
Paperback ISBN: 9780745333342
eBook ISBN: 9781783711482