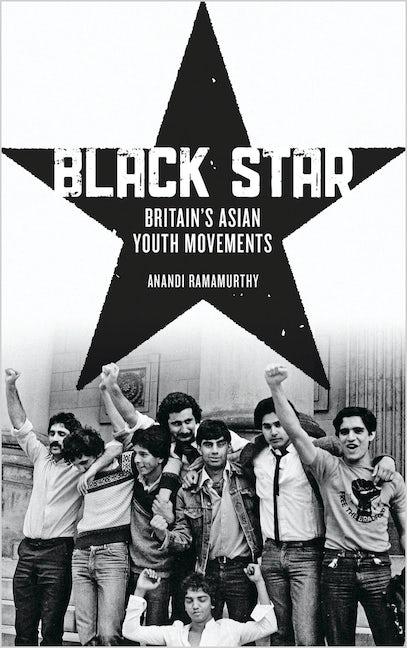 Tells the history of Britain's Asian Youth Movements from the 1970s and 1980s and shows their importance in creating today's multiracial Britain.
Black Star documents the vibrant Asian Youth Movements in 1970s and 80s Britain who struggled against the racism of the street and the state. Anandi Ramamurthy shows how they drew inspiration from Black Power movements as well as anti-imperialist and workers' struggles across the globe.

This book is populated by landmark events in anti-racist struggle, from the Grunwick strike, to the Handsworth riots, and the acquittal of the Bradford 12. Ramamurthy writes of the evolution of a politicised Asian youth in Britain, focussing particularly on how the struggle to make Britain 'home' led to the conception of a broad-based identity inspiring unity amongst all those struggling against racism: 'political blackness'.

Ramamurthy documents how by the late 1980s this broad based black identity disintegrated as Islamophobia became a new form of racism and how in the process the legacy of the Asian Youth Movements has been largely hidden. Black Star retrieves this history and demonstrates its importance for political struggles today.

Anandi Ramamurthy is a Reader in Post-Colonial Cultures and Senior Lecturer in Media here at Sheffield Hallam University. She is the author of Imperial Persuaders (Manchester University Press, 2003) and Black Star (Pluto, 2013).

'An absolute triumph' - Professor John Hutnyk, Goldsmiths College, University of London 'This fascinating account ... reclaims an important chapter in the history of the struggle of working-class Black communities against racism in Britain' - Amrit Wilson, author of Dreams Questions Struggles 'We can only hope that young people and their parents, of whatever ethnicity, demand this book is included in the school and college curriculum. It shows that, even before the 'war on terror' and Islamophobia, South Asian communities needed to engage in a defensive war on a neo-fascist and state terror that was relentlessly visited upon them' - Gus John, Red Pepper 'An important book in reminding us that the Asian community has played an important role in the history of the Left in Britain and the principles of solidarity and self determination are key to creating organisations that will undermine the sense of hopelessness that is endemic in society today' - Lipstick Socialist 'Offers readers the prequel to the ongoing debate on Islam and Muslims in Britain today, the historical context of which is too often ignored' - Sarah Hackett, The Journal of Modern History
Acknowledgements
List of Illustrations
1. Introduction
2. The Birth of the Youth Movements
3. The Movement Spreads
4. A Heterogenous Collectivity
5. Campaigning against the Immigration Laws
6. Self Defence is no Offence: The Bradford 12
7. The Later Youth Movements
8. New Organisations and New Identities
9. The Asian Youth Movements and Politics Today
Bibliography
Notes
Index
Published by Pluto Press in Sep 2013
Paperback ISBN: 9780745333489
eBook ISBN: 9781849649469

END_OF_DOCUMENT_TOKEN_TO_BE_REPLACED
Back to Top
X