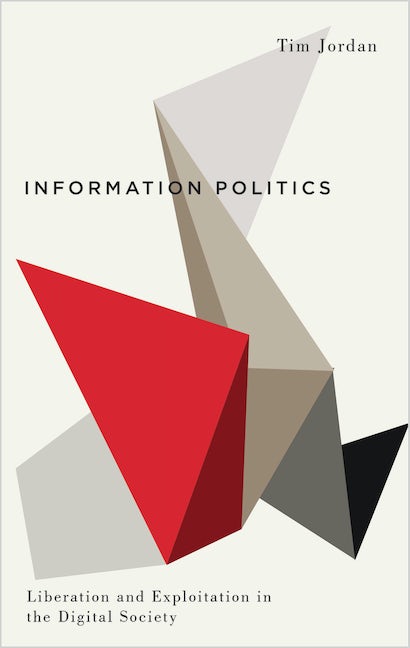 Liberation and Exploitation in the Digital Society

A critical look into how far our lives are controlled by modern digital systems, and how digital information is used by the powerful.
Conflict over information has become a central part of modern politics and culture. The sites of struggle are numerous, the actors beyond count. Currents of liberation and exploitation course through the debates about Edward Snowden and surveillance, Anonymous, search engines and social media.

In Information Politics, Tim Jordan identifies all these issues in relation to a general understanding of the nature of an information politics that emerged with the rise of mass digital cultures and the internet. He locates it within a field of power and rebellion that is populated by many interwoven social and political conflicts including gender, class and ecology.

The exploitations both facilitated by, and contested through increases in information flows; the embedding of information technologies in daily life, and the intersection of network and control protocols are all examined. Anyone hoping to get to grips with the rapidly changing terrain of digital culture and conflict should start here.

Tim Jordan is Professor and Head of School of Media, Film and Music at the University of Sussex. He is the author of Information Politics (Pluto, 2015), Internet, Culture and Society (Bloomsbury, 2014), Hacking (Polity, 2008), and Hacktivism and Cyberwars (Routledge, 2004).

'A must read for those seeking to understand the impact of digital culture and their attendant communication technologies on our quest for liberty and equality' - Hector Postigo, Associate Professor of Media Studies and Production, Temple University 'A determined philosophical inquiry into the nature of information politics, from the abstraction of the cloud to the battlegrounds of hactivists, to identify the forms of exploitation and liberation endemic to the recursive movement of information. This book offers rich philosophical grounding for current and future studies of new media' - Tarleton Gillespie, Associate Professor, Department of Communication, Cornell University 'A compelling and incisive account of fundamental developments in our increasingly digital world. His sophisticated theoretical analysis is clearly articulated and is based on a thorough grasp of both the technical and the social. He brilliantly avoids both cultural pessimism and techno-utopianism in his presentation of 'political antagonisms'' - Sally Wyatt, Professor of Digital Cultures in Development, Maastricht University 'This is an academic book of the highest quality that tackles what is sure to be the defining struggle of the 21st century: the struggle for control over access to information' - Nathalie Maréchal, International Journal of Communication
Series Preface
Acknowledgements
Introduction: Information as a Politics
Part I: Theory of Information Power
1. Recursion
2. Technologies' Embrace
3. Network and Protocol Theory: Dis/Organising Information Power
Part II: Platforms
4. Clouds
5. Securitisation of the Internet
6. Social Media Networks
Part III: Battlegrounds
7. Battlegrounds and the iPad
8. Death and Gaming
9. Hacktivism: Operation Tunisia, Modular Tactics and Information Activism
Conclusion: Information Exploitation and Information Liberation
Bibliography
Index