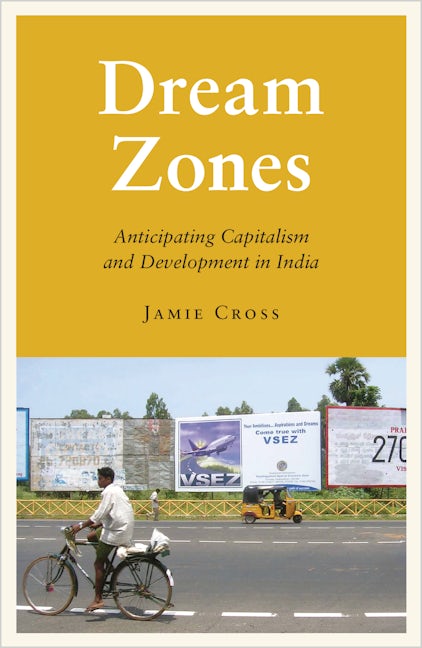 Anticipating Capitalism and Development in India

Drawing on five years of research in and around India's Special Economic Zones (SEZs), the book follows the stories of regional politicians, corporate executives, rural farmers, industrial workers and social activists to show how the pursuit of growth, profit and development shapes the politics of industrialisation and liberalisation.

This book offers a timely reminder that the global economy is shaped by sentiment as much as reason and that un-realised expectations are the grounds on which new hopes for the future are sown.

Jamie Cross is a Lecturer in Social Anthropology and Development at the University of Edinburgh. He is the author of Dream Zones: Anticipating Capitalism and Development in India (Pluto, 2014).

'This is an important and fascinating book. Engagingly written and ethnographically rich, Dream Zones reveals the multiple meanings, contestations and realities of Special Economic Zones in India' - Katy Gardner, Professor of Anthropology at London School of Economics
List of Maps and Figures
Series Preface
Acknowledgements
Glossary and Abbreviations
Note on Language
1. The Economy of Anticipation
2. The Vision of Growth
3. The Land of Speculation
4. The Factory of the Future
5. The Labour of Aspiration
6. The Struggles for Tomorrow
7. Anticipation, Capitalism, Anthropology
Notes
Bibliography
Index
Published by Pluto Press in Apr 2014
Paperback ISBN: 9780745333724
eBook ISBN: 9781783710393