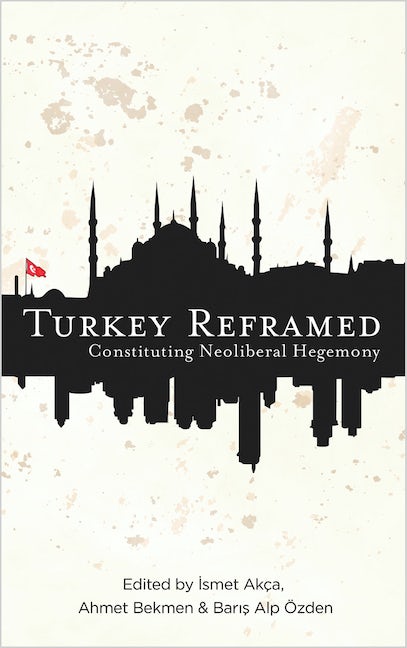 Cutting-edge guide for students, scholars and other interested readers who want to understand Turkey's recent history.
The first decade of the 2000s was a period of radical change in Turkish society and politics, marked by the major economic crisis of 2001 and the coming to power of ex-Islamist cadres organised under the Justice and Development Party (AKP). As the 'Turkish model' gains traction across the Middle East, this chronicle of Turkey's recent history dispels some important myths.

This period of radical change, with its continuities and breaks, pays close attention to the AKP, the main actor in the creation of a neoliberal hegemony in post-1980 Turkey. The contributors map relations between the AKP and the Kurdish people, the evolution of Turkish nationalism under the AKP and look at how everyday politics, from social welfare to housing, have been effected by the AKP's 'stabilisation strategy'. What is revealed is modern Turkey's conflictual, turbulent and painful recent histories, which vary wildly from the national myths that sustain neoliberal hegemony in the country.

Ismet Akca is Assistant Professor at the Department of Political Science and International Relations at Yildiz Technical University. He is currently head of the Istanbul branch of Egitim-Sen (the Union of Education and Scientific Workers) and the co-editor of Turkey Reframed (Pluto, 2013).

Ahmet Bekmen is a member of the Political Science Department at Istanbul University. He is an active member of Egitim-Sen (the Union of Education and Scientific Workers) and the co-editor of Turkey Reframed (Pluto, 2013).

Baris Alp Ozden is a member of the Department of Political Science and International Relations at Yildiz Technical University. He is an active member of Egitim-Sen (the Union of Education and Scientific Workers) and the co-editor of Turkey Reframed (Pluto, 2013).

'An important contribution in challenging much of the myth-making around Turkey's experience with neoliberalism and the supposed anti-imperialist credentials of the AKP' - Adam Hanieh, Department of Development Studies, SOAS, University of London
Introduction
Part I: Politics of Hegemony
1. The Long Road to the Constitution of Neoliberal Hegemony in the Political Sphere: A Periodization of the post-1980 Period, by smet Akça
2. Class and State in Post-1980 Turkey: The Rise of the Neoliberal Authoritarian State Form, by Ahmet Bekmen
3. The Struggle for Hegemony Between Turkish Nationalisms in the Neoliberal Era, by Güven Gürkan Öztan
4. The Davuto lu Doctrine: The Populist Construction of the Strategic Subject, by M. Sinan Birdal
5. The Three-Faceted Kurdish Policy of AKP: Tenders to the rich, alms to the poor, bombs to the opposition, by rfan Aktan
6. The Media in Turkey: From Neoliberal Militarism To Authoritarian Conservatism, by Uraz Ayd n
7. We’ll Come and Demolish Your House.” The Role Of Spatial (Re-)Production In The Neoliberal Hegemonic Politics Of Turkey, by Erbatur Çavu o lu and Julia Strutz
Part II: Re-Or entat on(s) of the Soc al Quest on(s)
8. The Transformation of Social Welfare And Politics in Turkey: A Successful Convergence of Neoliberalism and Populism, by Bar Alp Özden
9. Domesticity of Neo-liberalism: Family, Sexuality and Gender in Turkey, by Ece Öztan
10. The Deradicalization of Organized Labor, by M. Görkem Do an
11. Flexible and Conservative: Working Class Formation in an Industrial Town, by F. Serkan Öngel
12. The Rise of The Islamic Bourgeoisie and the Socialisation of Neoliberalism: Behind The Success Story of Two Pious Citiesm, by A. Ekber Do an and Yasin Durak
13. Neoliberal Hegemony and Grassroots Politics: The Islamist and Kurdish Movements, by Erdem Yörük
Notes on Contributors
Notes
References
Index
Published by Pluto Press in Dec 2013
Hardcover ISBN: 9780745333854
eBook ISBN: 9781849649803