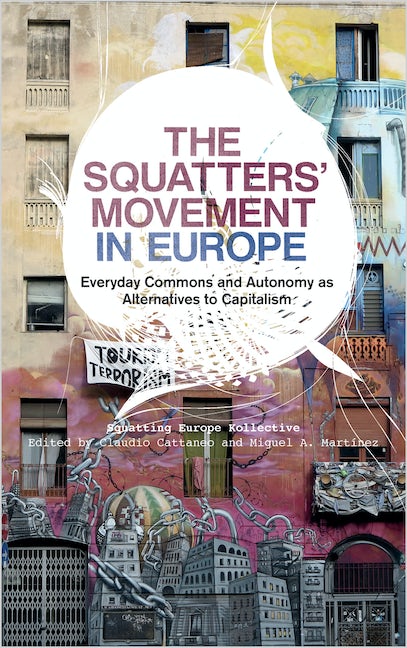 The Squatters' Movement in Europe

Commons and Autonomy as Alternatives to Capitalism

The book is written by an activist-scholar collective, whose members have direct experience of squatting: many are still squatters today. There are contributions from the Netherlands, Spain, the USA, France, Italy, Germany, Switzerland and the UK.

In an age of austerity and precarity this book shows what has been achieved by this resilient social movement, which holds lessons for policy-makers, activists and academics alike.

Claudio Cattaneo teaches ecological economics at the University of Edinburgh and the Universita Carlo Cattaneo in Castellanza, Italy. He is the co-author of The Squatters' Movement in Europe (Pluto, 2014). He is a squatter, bicycle mechanic and olive farmer.

Acknowledgements
Introduction: Squatting as an Alternative to Capitalism - Claudio Cattaneo and Miguel A. Martínez
1. Squatting as a Response to Social Needs, the Housing Question and the Crisis of Capitalism - Claudio Cattaneo and Miguel A. Martínez
Part I: Case Studies
2. 'The Fallow Lands of the Possible': An Enquiry into the Enacted Criticism of Capitalism in Geneva's Squats - Luca Pattaroni
3. The Right to Decent Housing and a Whole Lot More Besides: Examining the Modern English Squatters Movement - E.T.C. Dee
4. The Power of the Magic Key: The Scalability of Squatting in the Netherlands and the United States - Hans Pruijt
5. 'Ogni Sfratto Sarà una Barricata': Squatting for Housing and Social Conflict in Rome - Pierpaolo Mudu
Part II: Specific Issues
6. Squats in Urban Ecosystems: Overcoming the Social and Ecological Catastrophes of the Capitalist City - Salvatore Engel Di Mauro and Claudio Cattaneo
7. Squatting and Diversity: Gender and Patriarchy in Berlin, Madrid and Barcelona - Azozomox
8. Unavoidable Dilemmas: Squatters Dealing with the Law - Miguel A. Martínez, Azozomox and Javier Gil
Conclusions - Miguel A. Martínez and Claudio Cattaneo
Appendix: The Story of SqEK and the Production Process of This Book - Claudio Cattaneo, Baptiste Colin and Elisabeth Lorenzi
Notes on Contributors
Index
Published by Pluto Press in May 2014
Paperback ISBN: 9780745333953
eBook ISBN: 9781783710416