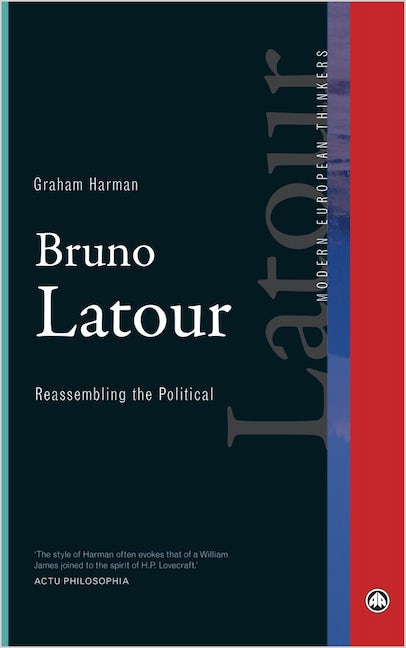 A biography of Bruno Latour, the sociologist and anthropologist, which focuses on his political philosophy.
Bruno Latour, the French sociologist, anthropologist and long-established superstar in the social sciences is revisited in this pioneering account of his ever-evolving political philosophy. Breaking from the traditional focus on his metaphysics, most recently seen in Harman's book Prince of Networks, the author instead begins with the Hobbesian and even Machiavellian underpinnings of Latour's early period encountering his shift towards Carl Schmitt then finishing with his final development into the Lippmann / Dewey debate. Harman brings these twists and turns into sharp focus in terms of Latour's personal political thinking.

Along with Latour's most important articles on political themes, the book chooses three works as exemplary of the distinct periods in Latour's thinking: The Pasteurization of France, Politics of Nature, and the recently published An Inquiry Into Modes of Existence, as his conception of politics evolves from a global power struggle between individuals, to the fabrication of fragile parliamentary networks, to just one mode of existence among many others.

Graham Harman is Distinguished University Professor at the American University in Cairo, Egypt. He is the author of Bruno Latour: Reassembling the Political (Pluto, 2014), Tool-Being: Heidegger and the Metaphysics of Objects (Open Court, 2002) and Prince of Networks: Bruno Latour and Metaphysics (re.Press, 2009).

'A delightful, informative read for Latour novices and experts alike' - Ian Bogost, Ivan Allen College Distinguished Chair in Media Studies and author of Alien Phenomenology, or What it’s Like to Be a Thing 'With refreshing creativity, Graham Harman extracts his political project from Bruno Latour's philosophical writings. His book lucidly maps out the course that Latour's thought charts across left and right - truth and power - not because this opposition doesn't matter, but because for all their practical urgency, today's crises also present a great intellectual challenge, requiring a redefinition of the very objectives of politics' - Noortje Marres
Abbreviations for Latour's Works Cited in the Book
A Note on the Life and Thought of Bruno Latour
Introduction: Truth Politics and Power Politics
1. In Search of a Latourian Political Philosophy
2. Early Latour: A Hannibal of Actants
3. Middle Latour: The Parliament of Things
4. Late Latour: Politics as a Mode
5. 'Usefully Pilloried': Latour’s Left Flank
6. 'An Interesting Reactionary': Latour’s Right Flank
7. 'A Copernican Revolution': Lippmann, Dewey and Object-Oriented Politics
8. Concluding Remarks
Notes
Bibliography
Index
Published by Pluto Press in Oct 2014
Paperback ISBN: 9780745333991
eBook ISBN: 9781783711987

The Politics of Bruno Latour: Between Truth and Power

Where do we place Bruno Latour place on the political spectrum? Graham Harman explores the political philosophy of the polarising theorist.

END_OF_DOCUMENT_TOKEN_TO_BE_REPLACED
Back to Top
X