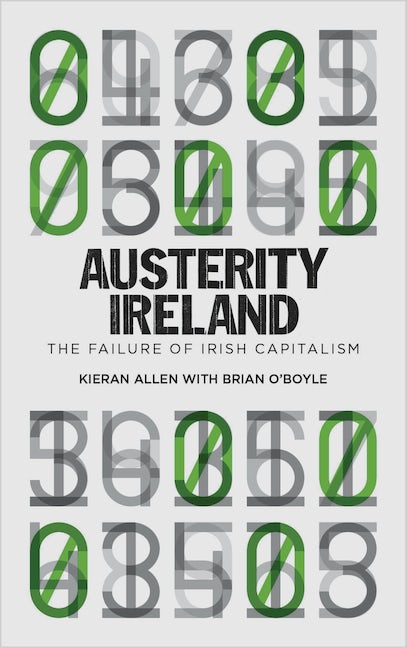 The Failure of Irish Capitalism

by Kieran Allen and Brian O'Boyle

Offers a deeply informed diagnosis of Ireland's current socio-economic and political malaise, suggesting a political earthquake may benefit the left.
Ireland has been marketed as the poster boy of EU austerity. EU elites and neoliberal commentators claim that the country's ability to suffer economic pain will attract investors and generate a recovery.

In Austerity Ireland, Kieran Allen challenges this official image and argues that the Irish state's response to the crash is typical of the Eurozone countries, serving to protect the economic privilege of the powerful, to the detriment of the middle and working classes. Looking at the various ways we could consider this austerity period a failure, including transforming Ireland into a tax haven and contributing to serious levels of unemployment, Allen reveals the extent of Ireland's current socio-economic and political malaise, suggesting that it may have created furtile ground for a leftist resurgence.

Brian O'Boyle is a Lecturer in Economics at St Angela College, National University of Ireland, Galway. He has published in the areas of the philosophy of science, the history of economics and the global economy. He is the co-author of Durkheim (Pluto, 2017) and a contributor to Austerity Ireland (Pluto, 2013).

'An unrelenting analysis of the austerity programme in Ireland' - Michael Taft, Irish Marxist Review
1. Wreckage
2. The Partners
3. The Failure of Austerity
4. The Re-Configuration of Ireland
5. Where are the Jobs?
6. Will There Be a Roof Over Our Heads?
7. Tax Haven Capitalism
8. A Change in Political Management
9. Why Don’t the Irish Protest
10. Are Sinn Fein Ireland’s Radical Left?
11. Conclusion
Notes
Index
Published by Pluto Press in Sep 2013
Paperback ISBN: 9780745334011
eBook ISBN: 9781849649551