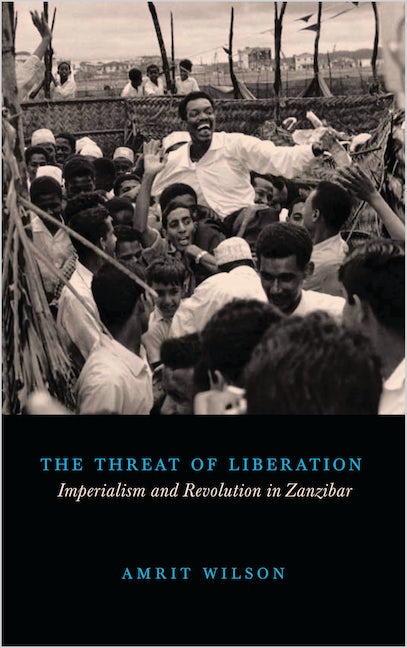 The Threat of Liberation

Imperialism and Revolution in Zanzibar

A gripping historical account of Cold War subversion and revolution in post-colonial Africa, with crucial lessons for today.
The Threat of Liberation returns to the tumultuous years of the Cold War, when, in a striking parallel with today, imperialist powers were seeking to institute 'regime change' and install pliant governments.

Using iconic photographs, declassified US and British documents, and in-depth interviews, Amrit Wilson examines the role of the Umma Party of Zanzibar and its leader, the visionary Marxist revolutionary, Abdulrahman Mohamed Babu. Drawing parallels between US paranoia about Chinese Communist influence in the 1960s with contemporary fears about Chinese influence, it looks at the new race for Africa's resources, the creation of AFRICOM and how East African politicians have bolstered US control. The book also draws on US cables released by Wikileaks showing Zanzibar's role in the 'War on Terror' in Eastern Africa today.

The Threat of Liberation reflects on the history of a party which confronted imperialism and built unity across ethnic divisions, and considers the contemporary relevance of such strategies.

Amrit Wilson was Senior Lecturer in Women's Studies/South Asian Studies at Luton University. She set up the first Asian women's refuge in London and works with 'Asian Women Unite'. She is author of Finding A Voice (Virago, 1978), which won the Martin Luther King award, and has written about black experiences in Britain, the politics of South Asia and gender issues. She is the author of Dreams, Questions, Struggles (Pluto, 2006) and The Threat of Liberation (Pluto, 2013).

'Amrit Wilson has tapped a wide range of sources to tell a story of Zanzibar in modern times. As interesting as the narrative she puts together is the vantage point from which she tells it' - Mahmood Mamdani, Herbert Lehman Professor of Government and Professor of Anthropology, Columbia University 'Getting beyond the headlines and the official histories, this book offers an insightful and compelling analysis of the concrete struggle against neo-colonialism as it has played out, over the last several decades, in Zanzibar and what is now Tanzania' - Bill Fletcher, Jr., co-editor of Claim No Easy Victories: The Legacy of Amilcar Cabral 'A well-researched study by a respected author of long-standing' - Abdulaziz Y. Lodhi, Professor Emeritus at the Dept. of Linguistics and Philology, Uppsala University 'Enables us not only to hear the voices of all those across the world but also those not in this world, but whose revolutionary spirit and spark continue to inspire us today. This book is a loud call to continue collectively challenging the present monster.' - Sarbjit Johal, Awaaz Magazine
Introduction
1. Anti-Colonial Struggles – the Early Days
2. The British Transfer Power to the Sultan and his Allies
3. The Zanzibar Revolution and Imperialist Fears
4. The Union with Tanganyika
5. Karume’s Despotic Rule
6. Trial in Zanzibar’s Kangaroo Court
7. Zanzibar in the Neoliberal Era
8. Diplomats, Aid and US military Interventions
References
Appendix 1: Political Programme of the Umma Party
Appendix 2: Charge sheet for the Umma defendants
References
Index
Published by Pluto Press in Aug 2013
Paperback ISBN: 9780745334073
eBook ISBN: 9781849649407

END_OF_DOCUMENT_TOKEN_TO_BE_REPLACED
Back to Top
X