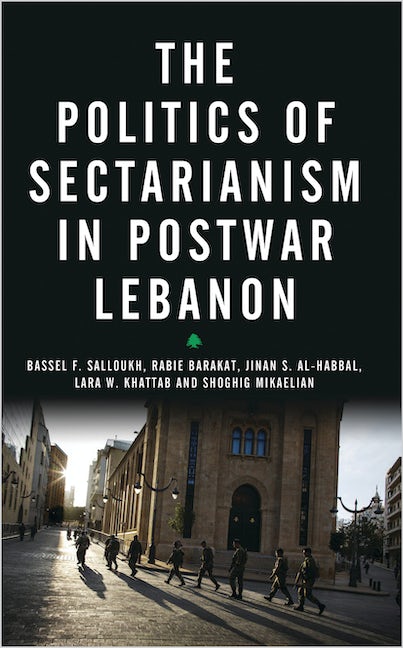 The Politics of Sectarianism in Postwar Lebanon

A revealing study the damaging nature of Lebanese sectarianism.

The wave of popular uprisings that swept across the Arab world starting in December 2010 rattled regimes from Morocco to Oman. However, Lebanon's sectarian system proved immune to the domestic and regional pressures unleashed by the Arab Spring. How can this be explained? How has the country's political elite dealt with challenges to the system? And, finally, what lessons can other Arab states draw from Lebanon's sectarian experience?

This book looks at the mix of institutional, clientelist, and discursive practices that sustain the sectarian nature of Lebanon. It exposes snapshots of an ever-expanding sectarian web that occupies substantial areas of everyday life and surveys struggles waged by opponents of the system - by women, teachers, public sector employees, students or coalitions across NGOs - and how their efforts are often sabotaged or contained by numerous systematic forces.

Bassel F. Salloukh is Associate Professor of Political Science at the Lebanese American University. He is author, co-author, and co-editor of a number of books including Beyond the Arab Spring (Lynne Rienner Firm, 2012) and The Politics of Sectarianism in Postwar Lebanon (Pluto, 2015).

Rabie Barakat is Lecturer in Media Studies in the Department of Sociology, Anthropology and Media Studies at the American University of Beirut. He is a former news presenter and field reporter in different Arab news outlets and co-author of The Politics of Sectarianism in Postwar Lebanon (Pluto, 2015).

Jinan S. Al-Habbal is a PhD candidate in International Relations at the University of St Andrews. She is the co-author of The Politics of Sectarianism in Postwar Lebanon (Pluto, 2015).

Lara W. Khattab is a PhD candidate in Political Science at Concordia University in Montreal, Canada. She is the co-author of The Politics of Sectarianism in Postwar Lebanon (Pluto, 2015).

Shoghig Mikaelian is a PhD candidate in Political Science at Concordia University in Montreal, Canada. She is the co-author of The Politics of Sectarianism in Postwar Lebanon (Pluto, 2015).

'A must read for anyone interested in what is going on in Lebanon and the Middle East today' - James Tully, Distinguished Professor Emeritus of Political Science, Law, Indigenous Governance and Philosophy at the University of Victoria, Canada.

'An important contribution to the study of identity politics in the Middle East. Offers a far more compelling treatment than many journalistic accounts' - Melani Cammett, Professor of Government, Harvard University

A judicious and well-argued case for why sectarianism continues to dominate the Lebanese political system, even though there is nothing inevitable about that result' - F. Gregory Gause, III, John H. Lindsey ’44 Chair, Professor of International Affairs and Head of the International Affairs Department at the Bush School of Government and Public Service, Texas A&M University

'The authors of this exceptional volume have added immeasurably to our understanding of the role of sectarian identities in all spheres of Lebanese life' - Steven Heydemann, Vice President, Applied Research on Conflict, United States Institute of Peace

'A rigorous, timely examination of the reproduction of sectarianism' - Open Democracy