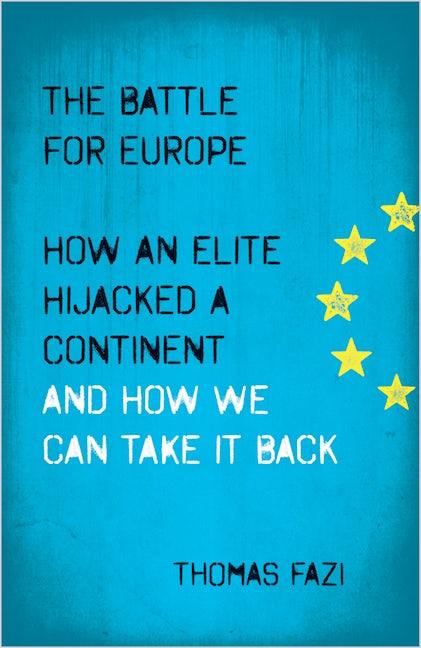 Explains what has happened in Europe following the financial crash of 2008 as a case of neo-liberal economic shock doctrine.
The Battle for Europe brings into sharp focus the historical importance of the current Eurozone crisis. Thomas Fazi argues that European Union (EU) elites have seized on the financial crash to push through damaging neoliberal policies, undermining social cohesion and vital public services.

'Narrates this war for the European Union's integrity and basic values and devastates the vicious claim that 'there is no alternative' to our present march toward collective misery' - Yanis Varoufakis, Finance Minister in Greece's Syriza government 'Everyone should read Piketty's book, of course. But Thomas Fazi's book, The Battle for Europe, deserves an equally high place in the charts' - Henk de Vos, Emeritus Professor of Sociology at the University of Groningen 'The book really is very, very good. I am particularly grateful for Thomas Fazi analysis, and placing on record the development of the crisis in Europe and its causes. But I am also grateful for the author's insistence that the Left must rise to give political leadership to a new reformed, Europe' - Ann Pettifor, director of Policy Research in Macroeconomics (PRIME) 'Combines the best tradition of investigative journalism with profound scholarly insight and splendid writing. I was myself drifting to saying goodbye to the EU altogether but reading Fazi's book convinced me that the progressive option must be followed instead' - Kees van der Pijl, Fellow of the Centre for Global Political Economy and Professor Emeritus at the University of Sussex 'A must-read' - Steve McGiffen, Assistant Professor, American Graduate School of International Relations and Diplomacy (AGSIRD) 'A solid, well argued 'political economy' of the current crisis. It enriches left debates about the crisis and the possible exits. Its particular strength lies in its capacity to demonstrate the class-politically motivated project of austerity based on a economic analysis' - Walter Baier, economist and coordinator the network transform! Europe 'Takes us to the front line in the struggle for progressive change in Europe. Those seeking pedestrian half-measures for reform will not find them in this book. Fazi goes to the heart of sickness of the European Union and proposes the fundamental changes required to achieve a Europe fit for working people. This is an essential book for anyone seeking an escape from the current dysfunctional austerity policies' - John Weeks, Professor Emeritus of Economics at the University of London 'Thomas Fazi's compelling history shows how flawed institutions, a weak tax system and bank-friendly financial codes produced the Eurozone crisis, and then how that debacle was transformed, country by country, into a crisis of public debts and an assault-by-bailout on Europe's social model' - James Galbraith, senior scholar at the Levy Economics Institute and chair of the Board of Economists for Peace and Security 'A timely and valuable addition to the existing literature on the crisis of the Euro Zone. Fazi offers us a lucid and tightly argued explanation of the roots of the crisis and its evolution, culminating in a call to action' - David Lizoain, economist and former economic advisor to the Cabinet of the President of Catalonia 'Fascinating ... delves deeper into the real causes of the crisis' - Ronald Janssen, Economic advisor, European Trade Union Confederation (ETUC), Transfer
List of Figures and Tables
Preface
1. The Financial Crisis
2. The Coup
3. The Real Causes of the Euro Crisis
4. From Economic Crisis to Economic Shock
5. Brave New Europe
6. Another Europe Is Possible!
Notes
Index
Published by Pluto Press in Feb 2014
Paperback ISBN: 9780745334509
eBook ISBN: 9781783710232