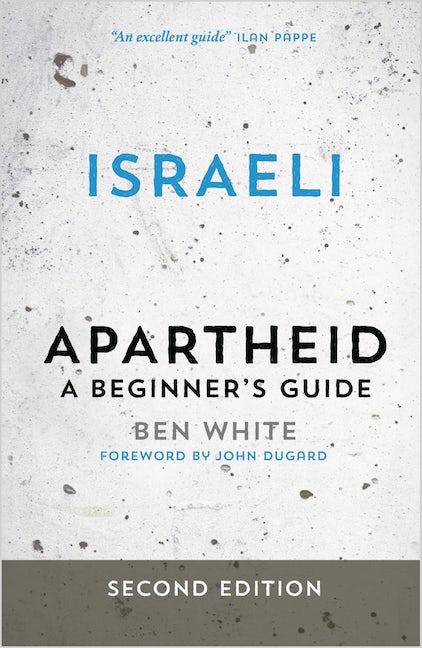 Updated and expanded edition of best-selling introduction to the Israel-Palestine conflict.
* Shortlisted for the Palestine Book Awards 2012*

Since its release in 2009 Israeli Apartheid: A Beginner's Guide has become an essential primer for undergraduate students and activists getting to grips with the Palestine/Israel conflict for the first time. Ben White skilfully distills the work of academics and experts into a highly accessible introduction.

This new updated and expanded edition includes information on the Israeli blockade and attacks on the Gaza Strip since 2008, new policies targeting Palestinian citizens of Israel and the growth of the global Boycott Divestment Sanctions campaign.

Packed with vital information, quotations and resources, Israeli Apartheid never loses the human touch. The book is rooted in the author's extensive personal experience in Palestine and includes testimonies by Palestinians describing how Israeli apartheid affects their daily lives.

'An essential guide for understanding Israeli apartheid - both the history, and the day to day reality' - Eyal Weizman, author of Hollow Land (2007) 'An excellent guide for understanding the magnitude of the crimes committed against the Palestinians and the nature of their present suffering and oppression' - Ilan Pappe, author of Out of the Frame 'A highly commendable effort to throw light on a fraught subject' - Archbishop Desmond Tutu 'This book takes on the most complex arenas of injustice and contested history, and renders them accessible, lucid, and morally compelling' - Karma Nabulsi, University of Oxford 'This little book is an invaluable tool' - Raymond Deane, The Electronic Intifada 'White's thesis is well researched, well argued and copiously referenced' - Susan de Muth, The Palestine Chronicle
List of Maps, Figures and Photographs
Acknowledgements
Foreword by John Dugard
Preface to the Second Edition
Introducing Israeli Apartheid
Part I: Israeli Independence, Palestinian Catastrophe
Part II: Israeli Apartheid
Part III: Towards Inclusion and Peace – Resisting Israeli Apartheid
Frequently Asked Questions
Glossary
Israeli Apartheid: A Timeline
Resources
Notes
Select Bibliography
Index
Published by Pluto Press in Feb 2014
Paperback ISBN: 9780745334639
eBook ISBN: 9781783710270

END_OF_DOCUMENT_TOKEN_TO_BE_REPLACED
Back to Top
X