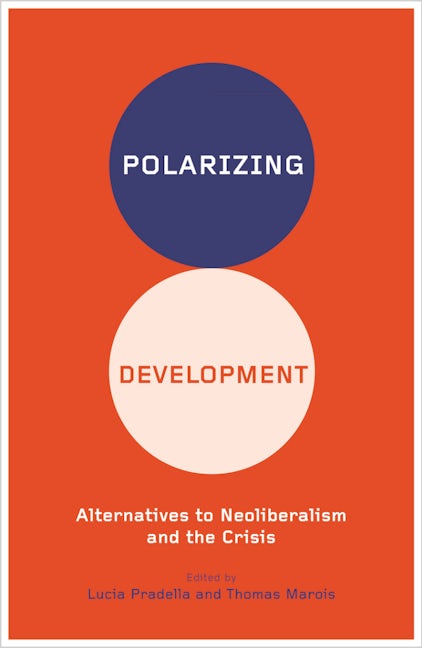 Alternatives to Neoliberalism and the Crisis

A new generation of Marxian scholars discusses the modern age of development under neoliberalism in this collection of essays.
The global economic crisis has exposed the limits of neoliberalism and dramatically deepened social polarization. Yet, despite increasing social resistance and opposition, neoliberalism prevails globally.

Radical alternatives, moreover, are only rarely debated. And if they are, such alternatives are reduced to new Keynesian and new developmental agendas, which fail to address existing class divisions and imperialist relations of domination.

This collection of essays polarizes the debate between radical and reformist alternatives by exploring head-on the antagonistic structure of capitalist development. The contributors ground their proposals in an international, non-Eurocentric and Marxian inspired analysis of capitalism and its crises. From Latin America to Asia, Africa to the Middle East and Europe to the US, social and labour movements have emerged as the protagonists behind creating alternatives.

This book's new generation of scholars has written accessible yet theoretically informed and empirically rich chapters elaborating radical worldwide strategies for moving beyond neoliberalism, and beyond capitalism. The intent is to provoke critical reflection and positive action towards substantive change.

Lucia Pradella works at the University of Venice, Ca' Foscari, and is a Research Associate in the SOAS Department of Development Studies. She is author of Polarizing Development: Alternatives to Neoliberalism and the Crisis (Pluto, 2014), Globalisation and the Critique of Political Economy (2014) and L'Attualità del 'Capitale' (2010).

Thomas Marois is a Senior Lecturer in the Department of Development Studies, SOAS, University of London. He is the author of Polarizing Development: Alternatives to Neoliberalism and the Crisis (Pluto, 2014) and States, Banks and Crisis: Emerging Finance Capitalism in Mexico and Turkey (2012).

'Not only rejects neoliberalism and its alleged alternative, new developmentalism, on theoretical grounds; it also provides real solutions as to how neoliberal capitalism should be challenged' - Professor Ben Fine, Department of Economics, SOAS; author of Marx's Capital and From Political Economy to Economics 'Essential reading for anyone wishing to understand the expressions of neoliberal domination and resistance across national spaces in global capitalism' - Susanne Soederberg, Professor of Global Political Economy at Queen’s University, Canada, author of Debtfare States and the Poverty Industry: Money, Discipline and the Surplus Population. 'A strong critique of false prophets and offer their own version of a people-centered society. The inspirations run from the indignation of the Global South to the indignados of southern Europe. From the depths of what appears to be hopelessness, Pradella and Marois have collected work that tries to rekindle hope' - Vijay Prashad, author of The Poorer Nations: A Possible History of the Global South 'Brings together authors who combine high academic qualification and critical thinking. It offers a broad, dense and comprehensive picture of the challenges that the supersession of neoliberalism forces us to face' - Ricardo Antunes, Professor in Sociology of Labour, State University of Campinas 'Not only rejects neoliberalism and its alleged alternative, new developmentalism, on theoretical grounds; it also provides real solutions as to how neoliberal capitalism should be challenged. A near-perfect 'post-crisis' guide to the [anti-neoliberal] movement' - Maciej Bancarzewski, International Socialism
Foreword
1. Polarising Development – Introducing Alternatives to Neoliberalism and the Crisis
Part I: Alternative Themes
2. Beyond Impoverishment: Western Europe in the World Economy - Lucia Pradella
3. Banking on Alternatives to Neoliberal Development - Thomas Marois
4. The Political Economy of Development: Statism or Marxism? - Benjamin Selwyn
5. The Globalisation of Production and the Struggle for Workers’ Unity: Lessons from Bangladesh - John Smith
6. The ‘Rise of the South’ - Alfredo Saad-Filho
7. Hegemony in Question: U.S. Primacy, Multi-Polarity and Global Resistance - Jerome Klassen
8. Neoliberalism, Crisis and International Migration - Pietro Basso
9. Neoliberalism, Social Reproduction and Women’s Resistance: Lessons from Cambodia and Venezuela - Sarah Miraglia and Susan Spronk
10. Exploding in the Air: Beyond the Carbon Trail of Neoliberal Globalisation - Andreas Malm
11. Defend, Militate and Alternate: Public Options in a Privatised World - David A. McDonald
12. Utopian Socialism and Marx’s Capital: Envisioning Alternatives - Hugo Radice
Part II: Alternative Cases
13. Beyond Neoliberalism and New Developmentalism in Latin America: Towards an Anti-Capitalist Agenda - Abelardo Mariña-Flores
14. Crisis and Class, Advance and Retreat: The Political Economy of the New Latin American Left - Jeffery R. Webber
15. Taking Control: Decommodification and Peasant Alternatives to Neoliberalism in Mexico and Brazil - Leandro Vergara-Camus
16. The Rise of East Asia: A Slippery Floor for the Left - Dae-oup Chang
17. Labour as an Agent of Change: The Case of China - Tim Pringle
18. Alternatives to Neoliberalism in India - Rohini Hensman
19. Musical Chairs on the Sidelines: The Challenges of Social Transformation in Neocolonial Africa - Baba Aye
20. Challenging Neoliberalism in the Arab World - Adam Hanieh
21. Socialist Feminist Alternatives to Neoliberalism in Turkey - Demet Ozmen Y lmaz
22. Uneven Development and Political Resistance against EU Austerity Politics - Angela Wigger and Laura Horn
23. Crisis, Austerity and Resistance in the United States - David McNally
List of Contributors
Index
Published by Pluto Press in Nov 2014
Paperback ISBN: 9780745334691
eBook ISBN: 9781783711826