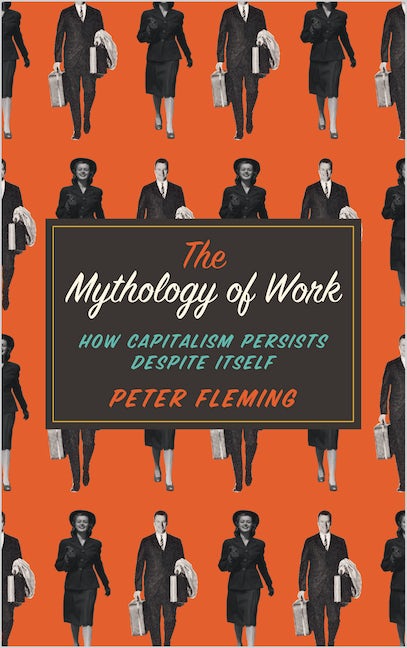 How Capitalism Persists Despite Itself

How neoliberal society has transformed the nature of work into a pointless ritual.
There was once a time when 'work' was inextricably linked to survival and self-preservation; where the farmer ploughed the land so their family could eat. But the sun has long since set on this idyllic tableau, and what was once an integral part of life has slowly morphed into a painful and meaningless ritual, colonising almost every part of our lives - endless and inescapable.

In The Mythology of Work, Peter Fleming examines how neoliberal society uses the ritual of work (and the threat of its denial) to maintain the late capitalist class order. As our society is transformed into a factory that never sleeps, work becomes a universal reference point for everything else, devoid of any moral or political worth.

'Thought-provoking.' (Business Book of the Week) - The Times 'The practical lesson from Fleming's provocation is to ask ourselves how much of the work we do every day is simply posturing and bad habit.' - Financial Times 'Highly recommended.' - CHOICE 'Fleming's analysis of work critically confronts today's capitalism, now well into its shift from old centres to new, lower-wage centres. The resulting precarity, scarcity, and mindlessness of work imposed on the old centers is being covered with an ideological fetishisation of work that this book deconstructs well.' - Richard Wolff, Professor of Economics Emeritus, University of Massachusetts, Amherst 'Fleming has established himself as the foremost critic of our generation on the pervasive and pernicious ideologies of business.' - Stefano Harney, Professor of Strategic Management Education, Singapore Management University 'Acerbic, darkly humorous ... an entertaining read' - Kate Hardy, Times Higher Education 'Doesn't just paint a bleak portrait of modern life under late capitalism: it also holds that notions of the dignity of labour in the 21st century have become redundant, a joke.' - Peter Murphy, the Irish Times 'I very much enjoyed reading this book. It draws upon a wide range of critical theory, especially Marx, Nietzsche, Adorno, Foucault, Negri, Certeau, and Deleuze and Guattari, in order to achieve a powerful critique of capitalist work' - Sociology
Introduction: Once Upon a Time, Man Invented Work...
1. The Factory That Never Sleeps
2. Planet of Work
3. What Is Managerialism?
4. Viral Capitalism in the Bedroom
5. Corporate Ideology as False Truth Telling
6. Critique of Dialogical Reason
Conclusion: Inoperative Critique and the End of Work
References
Index
Published by Pluto Press in May 2015
Paperback ISBN: 9780745334868
eBook ISBN: 9781783713004

Peter Fleming examines how neoliberal society uses the ritual of work (and the threat of its denial) to maintain the late capitalist class order.

END_OF_DOCUMENT_TOKEN_TO_BE_REPLACED
Back to Top
X