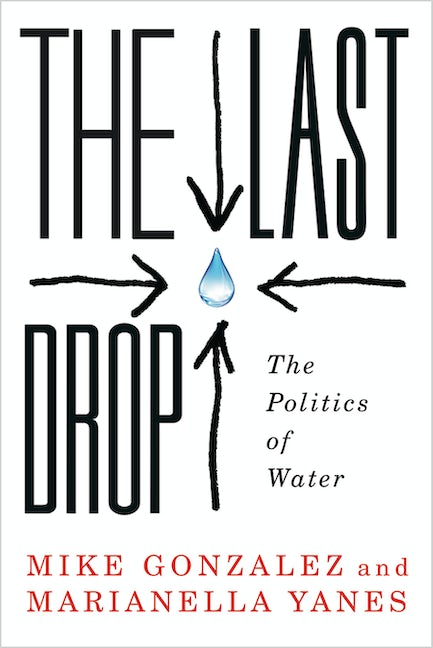 The Politics of Water

by Mike Gonzalez and Marianella Yanes

A close look at the privatisation of the most political resource on earth - water
Indispensable for human existence yet increasingly owned and controlled by private capital; the last decade has witnessed an intensifying battle for water. The Last Drop is a wake-up call to everyone who takes for granted what comes out of their kitchen tap.

This book traces a path through the arguments that surround the question of water, setting out to make the scientific arguments more accessible and the political questions more urgent. The exploding profits of the multinational companies which dominate the water industry are testimony to how high the stakes are - by 2012 it had become a worth a trillion dollars.

Against the market fundamentalists, the authors argue that it is both possible and necessary that considerations of equity and social justice prevail. They call for our water supply to be saved from subordination to the whims of the multinationals and placed under direct democratic public control.

Marianella Yanes is a Venezuelan journalist and writer for television and film. Until January 2009 she worked for the Venezuelan State Oil Corporation (PDVSA) as a journalist and documentary maker. She is the co-author of The Last Drop (Pluto, 2015).

'Seminal' - LSE Review of Books 'Water is a resource that belongs to all of us, and this perceptive book takes issue with the way global capitalism has redefined water as a commodity, and depicts the bitter harvest that has resulted from water privatisation.' - Richard Boyd Barrett T.D. (Member of Irish Parliament) 'A definitive analysis of the current world water challenge. To understand the “crisis of governance” that has changed water as a human right to a profitable commodity for financial interests, you must read The Last Drop.' - Marcela Olivera is the coordinator of the Red VIDA, an Inter-American water justice network. 'In this sobering account of hydro-politics, Gonzalez and Yanes remind us that human greed - not environmental inadequacy - lies at the heart of the global water 'crisis'.' - Dr Marcelle Dawson, Senior Lecturer in Sociology (University of Otago, New Zealand) and Vice-President, Research Committee 47 (Social Classes and Social Movements), International Sociological Association. 'Books like this are rare. Eloquent, poetic, enraged, committed, Marxist, environmentalist, written from the Global South, a book full of fire.' - Jonathan Neale, author of Stop Global Warming, Change the World 'A grim reminder and a wake-up call to liberate water from the predominant notion that 'whoever controls water controls society'' - Current Science 'A positive, necessary, and timely introduction to the mammoth global problems we will face for some time to come' - Marx & Philosophy Review of Books
List of Figures, Tables and Boxes
Preface
Acknowledgements
Introduction
1. A Floating Planet
2. How Water was Privatised
3. Disasters, Natural and Otherwise
4. A Short Trip through Amazonia
5. Bitter Harvests
6. Virtual Water
7. Water and Global Warming
8. Ya Basta! Enough Is Enough!
9. What Is to Be Done?
10. A New World Water Order
Notes
Index
Published by Pluto Press in Sep 2015
Paperback ISBN: 9780745334912
eBook ISBN: 9781783715213