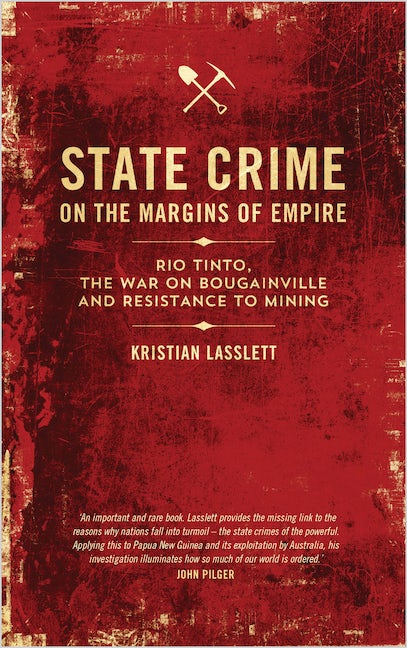 State Crime on the Margins of Empire

Rio Tinto, the War on Bougainville and Resistance to Mining

State Crime on the Margins of Empire represents a unique intervention rooted in a classical Marxist tradition that challenges positivist streams of criminological scholarship, in order to illuminate with greater detail the historical forces faced by communities in the global south caught in the increasingly violent dynamics of the extractive industries.

Kristian Lasslett is a Lecturer in Criminology at the University of Ulster and sits on the International State Crime Initiative's executive board. He is the author of State Crime on the Margins of Empire: Rio Tinto, the War on Bougainville and Resistance to Mining (Pluto, 2014), and editor of the State Crime Testimony Project and joint editor-in-chief of State Crime.

'An important and rare book. Lasslett provides the missing link to the reasons why nations fall into turmoil - the state crimes of the powerful. His investigation illuminates how so much of the world is ordered' - John Pilger 'Compelling... through careful analysis, Lasslett shows us that imperialism remains alive and well and the inspiring individuals who dare to resist it. I salute his unique voice in a time of intellectual cowardice' - Antony Loewenstein, independent journalist and best-selling author of My Israel Question and Profits of Doom 'This is quite simply the best case study so far that explicitly addresses state violence in the Global South through a state crime 'lens''. - Tony Ward, Reader in Law, Hull University 'A fascinating depiction of extensive state criminality in Bougainville. Lasslett offers readers a deeply researched narrative, at once illuminating and horrifying, that is a microcosm of the daily harms wrought worldwide by neoliberal globalisation. Highly recommended' - Richard Falk, Professor Emeritus of International Law at Princeton University and former United Nations Special Rapporteur on Palestinian human rights 'A must read for anyone who wants to understand how and why our world is being destroyed for profit' - David Whyte 'Exposes the central crime-ridden workings of Empire in this detailed study from the periphery. His wealth of empirical evidence goes beyond the remarkable' - Scott Poynting, Professor in Criminology, University of Auckland 'A fascinating case study of engaged social research' - Pacific Affairs
Series Introduction
Abbreviations
Acknowledgements
1. State Crime and the Empire of Capital
2. The Specificities of Papua New Guinea’s Development
3. From Landowner Crisis to Industrial Sabotage
4. Eight Days That Shook BCL, the First Mine Shutdown and Its Aftermath
5. A Tale of Two Solutions: Counterinsurgency Warfare and the Bougainville Package
6. The Making of Civil War on Bougainville
7. State Crime and Really Existing Capitalism: The Lessons of Bougainville
Afterword: Impunity, Civil Society and the Struggle Ahead in Melanesia
Notes
Bibliography
Index
Published by Pluto Press in Aug 2014
Hardcover ISBN: 9780745335049
eBook ISBN: 9781783712304