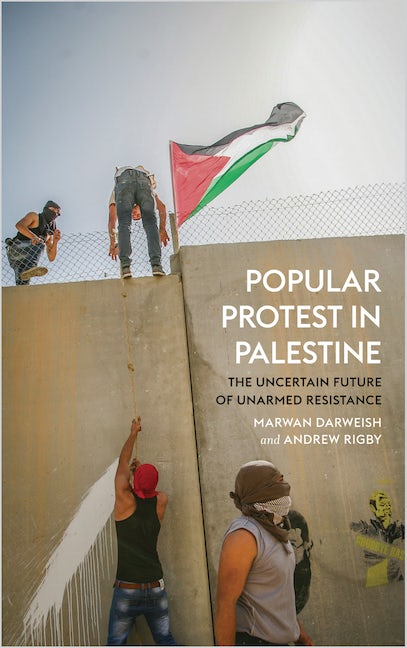 The Uncertain Future of Unarmed Resistance

by Marwan Darweish and Andrew Rigby

Shines a light on the often under-emphasised unarmed and peaceful protest movements in Palestine
This is a thoughtful and sensitive analysis of the history and significance of non-violent civil resistance in the Palestinian national movement. It shows how the thread of unarmed struggle has run through the history of Palestinian liberation, from the establishment of the Israeli state, through the Nakba and to the present day.

Set in this historical context, the book draws upon personal conversations and living history in order to focus on the contemporary movement in the Occupied Palestinian Territories. By analysing this under-emphasised dimension of the Palestinian struggle, the authors argue that today, the popular resistance movement, especially in the West Bank, is the most significant form of struggle against the ongoing occupation.

They also address the international dimensions of the struggle, focusing in particular on the BDS campaign, the role of Israeli and international solidarity activists, and the changing forms of engagement developed by international agencies seeking to work on the roots of the conflict.

Marwan Darweish is Principal Lecturer in Peace Studies at the Centre for Trust, Peace and Social Relations at Coventry University. He has extensive experience in conflict transformation and peacebuilding across the Middle East region and internationally. He co-edited Peacebuilding and Reconciliation: Contemporary themes and challenges (Pluto 2012) and is the co-author of Popular Protest in Palestine (Pluto, 2015).

Andrew Rigby is Emeritus Professor of Peace Studies, Coventry University where he was the founding director of the Centre for Peace and Reconciliation Studies. He is the author Justice and Reconciliation (Lynne Rienner Publishers, 2001) and Popular Protest in Palestine (Pluto, 2015).

'The most significant and comprehensive study of this important but under-appreciated part of the Palestinian resistance' - Stephen Zunes, Professor of Politics and Coordinator of Middle Eastern Studies, University of San Francisco 'A sensitive, thoughtful study, based on personal conversations meticulously documented and analysed by two people committed to non-violent change' - Diana Francis, former President of the International Fellowship of Reconciliation and Chair of the Committee for Conflict Transformation Support 'Provides a highly knowledgeable, well-written and balanced treatment of nonviolent action by and in support of Palestinian aspirations.' - Brian Martin, professor of social sciences at the University of Wollongong, Australia and vice president of Whistleblowers Australia 'Very valuable' - Ahdaf Soueif 'The most insightful, comprehensive, and sensitive academic study of today's Palestinian popular resistance' - Thimna Bunte, +972 Blog 'An important and rare look into the psyche of a region that cannot seem to shed this damnable conflict.' - M. D. Crosston, CHOICE 'Comprehensive and detailed' - Middle East Monitor
Acknowledgements
1. Introduction
2. Palestinian Resistance to the Establishment of the State of Israel
3. Palestinians in Israel: From Quiet Resistance to Audible Protest and Political Mobilisation
4. From the Nakbha to the Separation Wall: 1948-2002
5. The Resurgence of Popular Resistance: 2002–13
6. Challenges Facing Palestinian Popular Resistance
7. The Role of Israeli Peace and Solidarity Activists
8. Aid, Advocacy and Resilience: The Role of International Humanitarian Aid Agencies
9. Links in the Chain – International Leverage?
10. Conclusion
Notes
Bibliography
Index