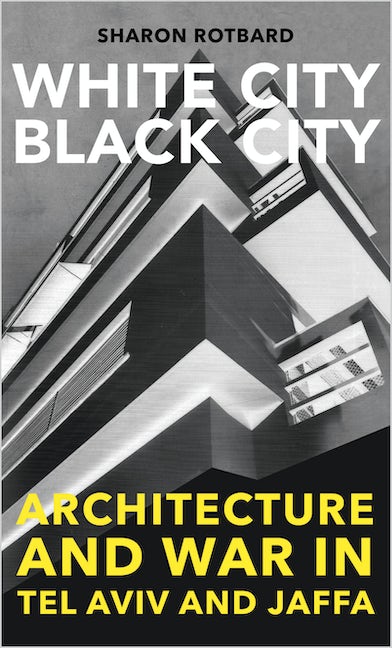 Architecture and War in Tel Aviv and Jaffa

Jaffa is the 'Black City', the Palestinian city that was largely obliterated to make way for a new European-style architecture at the heart of a newly-formed Israel.

Both a gripping narrative and a unique architectural record, this book shows how any city in the world is made not only of stones and concrete but also of stories and histories - victors and losers, predator and prey. In this way, the legend of the Black City and the White City, architecture and war, is our story too.

'A superbly researched and exemplary architectural study ... If you want an explanation of the roots of the Israel-Palestine conflict - and of just how deep they go, right into the very foundations of the buildings - this book gives one of the most unusual and convincing accounts' - Owen Hatherley, the Guardian 'An important and fascinating exposé through architecture, geography and history. A sad but revealing history of how myths are forged and histories corrupted' - Raja Shehadeh, author of Palestinian Walks: Notes on a Vanishing Landscape (Profile Books, 2008) and winner of the Orwell Prize for Literature 'This tale of Tel Aviv's growth from a Jaffa suburb to a metropolis is gripping' - The Economist 'Fascinating' - Edwin Heathcote, Financial Times 'A path-breaking and brilliant analysis that combines architecture, urban design, military strategy and general culture into an exhilarating war of streets and homes.' - Eyal Weizman, author of Hollow Land: Israel's Architecture of Occupation (Verso, 2012) 'White City, Black City is a detailed and useful corrective to the mainstream Zionist narrative about the founding of Tel Aviv' - Times Literary Supplement 'Rotbard's narrative contains fascinating insights' - Haaretz 'White City, Black City is not a book about architecture. It is a political text written in a beautiful clear language.' - Time Out 'A challenging book that deserves to be read and argued over. Rotbard here slaughters an especially sacred cow: Tel Avivness' - Tom Segev, Haaretz 'A fundamental, fascinating and clever book on architecture in the service of politics' - Adam Baruch, Maariv
Part I: White City
Book of Paper, Book of Stone
Writers and Builders
The White City Exhibition
The Invention of Normality
Conservation
Whitened City
White Lies
Round Corners
Good Old Eretz Israel
Whiter than White City
Built on Dunes
Part II: Black City
The Black Patch
War
Fleeing Jaffa
Bypassing Manshieh
Spatial Contradiction
‘Those Polish of the Orient’
Separation
British 1930s
Urbicide
Cleansing
Jaffa – Tel Aviv
An Occupied City
Hebraized City
The Big Zone
Antique Jaffa
Green Dunes
Raping the Bride of the Sea
The Orange Route
The Children of Jaffa
The Menorah
Part III: White City, Black City and a Rainbow
Uncritical Modernists
Blue and White
Multicultural City
Afterword
Acknowledgements
Notes
Bibliography
Index
Bibliography
Index
Published by Pluto Press in Jan 2015
Paperback ISBN: 9780745335117
eBook ISBN: 9781783713141