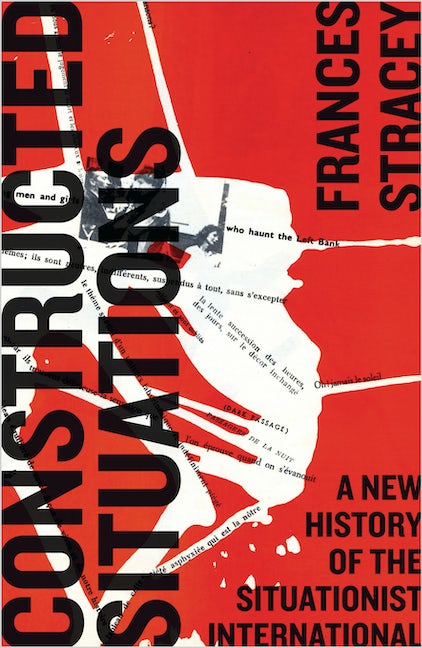 A New History of the Situationist International

A ground-breaking rethink of the radical Situationist art movement drawn from a life's worth of research.
The Situationist International were a group of anti-authoritarian, highly cultured, revolutionary artists whose energy and enragement fundamentally shaped the revolutions of the late 1960's, most famously in Paris in May '68. They took on their shoulders the history of the workers' struggle, saw that it had been corrupted by authoritarianism and transformed it, with influences incorporating the avant-garde via Dada and Surrealism. They were not Marxologists, defenders of the faith. Marxism came back to life in their raging analyses, the use of the 'spectacle' and at the heart of the project was the idea of the constructed situation.

This book by Frances Stracey offers itself up as the 'first historiography of constructed situations'. Within it are new insights into the movement, and with them, a sense of relevance to political situations and practice today. As an archivist, Stracey uncovered new documents which, amongst other things, revealed how the SI related to representations of sexuality; and is able to discuss whether they could be considered as feminists or not. She also looked at their famous motto 'Never Work' and again shows how alienated labour is even more relevant to us today.

Constructed Situations is not a history of celebrated personalities, or cultural influences, or political circumstances. It is instead an open door to one of the most influential art movements in modern history, and an invitation for us to reclaim inspiration from this ubiquitous movement.

Frances Stracey (1963-2009) is the author of Constructed Situations: A New History of the Situationist International (Pluto, 2014). She was Senior Lecturer in the History of Art Department, University College London.

'Frances Stracey was an original and committed interpreter of the Situationist International, who saw their work not just as art history but as contributing to an ongoing challenge to commodified life, down into our own times' - McKenzie Wark, author of The Beach Beneath the Street 'The most penetrating inquiry into Situationist strategy yet to appear' - Times Higher Education 'Fuelled by her remarkable insights into the work of the image in an image-culture, Frances Stracey offers a ground-breaking and timely account of Situationist 'situations'. Not only does she restore a place for women as radical subjects within the movement but she fearlessly shows us what is at stake in living such a project now' - Briony Fer, Professor of Art History, University College London 'Stracey returns the SI to a living tradition of critique and negation in art. It is her work on women in the SI and the debate on gender and class, identity and the universal, though, that defines her investigation of the 'situation'' - Professor John Roberts, author of The Art of Interruption: Realism, Photography and the Everyday 'Challenging the prevalent woolly and dehistoricised readings, Frances Stracey advances a powerful and incisive reconstruction of SI practice' - Gail Day is senior lecturer in the School of Fine Art, History of Art and Cultural Studies at the University of Leeds and author of Dialectical Passions: Negation in Postwar Art Theory 'Stracey does not reduce the Situationist movement to a form of art praxis or media theory. She takes the Situtationist's claim to have developed a modern approach to revolution seriously and focuses on the 'construction of situations' as a practical alternative to the spectacle. She addresses the difficult problem of assessing what parts of the Situationist legacy may still inspire contemporary critical cultural forms' - Anselm Jappe, author of Guy Debord
List of Figures
Series Preface
Preface
Acknowledgements
Introduction: Lessons in Failure
Excursus I: The Society of the Spectacle
Excursus II: Constructed Situations
Reconstructing Situations
1. Surviving History: A Situationist Archive
2. Industrial Painting: Towards a Surplus of Life
3. Destruktion af RSG-6: The Latest Avant-Garde
4. Consuming the Spectacle: The Watts Riot and a New Proletariat
5. Situationist Radical Subjectivity and Photo-Graffiti
6. The Situation of Women
Coda: Learning from the SI
Notes
Index
Published by Pluto Press in Oct 2014
Paperback ISBN: 9780745335261
eBook ISBN: 9781783712243