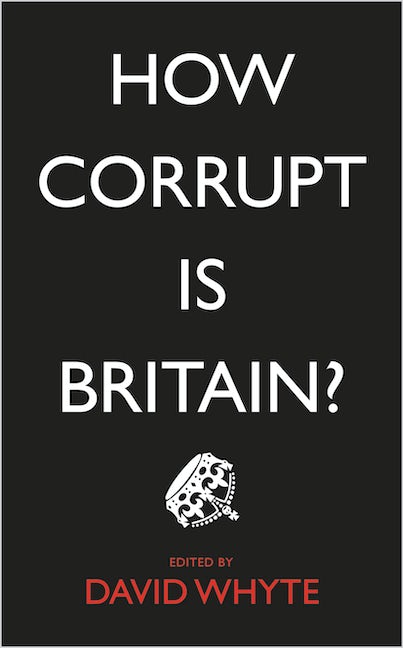 An collection of powerful exposés which reveal corruption in different arms of the British state and call for fundamental political change.
Banks accused of rate-fixing. Members of Parliament cooking the books. Major defence contractors investigated over suspect arms deals. Police accused of being paid off by tabloids. The headlines are unrelenting these days. Perhaps it's high time we ask: just exactly how corrupt is Britain?

David Whyte brings together a wide range of leading commentators and campaigners, offering a series of troubling answers. Unflinchingly facing the corruption in British public life, they show that it is no longer tenable to assume that corruption is something that happens elsewhere; corrupt practices are revealed across a wide range of venerated institutions, from local government to big business. These powerful exposes shine a light on the corruption fundamentally embedded in UK politics, police and finance.

'A game-changing book. It should be read by everyone' - George Monbiot, the Guardian 'Concentrates on new forms of corruption associated with the reorganisation of the state in the neo-liberal era, detailing the new ways in which the state has been infested by private interests' - Times Literary Supplement 'An ambitious collection of essays ... which point to a contemporary malaise' - New Statesman 'Whyte deserves huge credit for bringing different aspects of the picture together into a coherent, disturbing and persuasive expose of the hypocrisy of a country that so often likes to portray itself as some sort of beacon of probity in a corrupt world' - The Tablet 'NGO Transparency International tells us that Britain is the fourteenth most corrupt out of 177 nations and Whyte demonstrates exactly how in this myth-busting work ... Many of the examples are familiar, but together they provide an unsettling narrative' - Big Issue in the North 'At last, a book that asks the right questions about corruption, and provides some fascinating and important answers. Corruption isn't what — or where — most people think it is' - Nicholas Shaxson, author of Treasure Islands: Tax Havens and the Men who Stole the World 'This excellent book should be read by everyone but particularly by those who harbour a belief that our liberal democracy protects against the worst forms of state-corporate crime' - Penny Green, Professor of Law and Globalisation, Queen Mary University of London, Director of the International State Crime Initiative 'What concerns the writers is that the public will regard corruption as unstoppable and something they can do nothing about. That each crime reported will lead to apathy, alienation and atomisation. Unite remains committed to ensuring this will not be the case' - Unite the Union - Book of the Month
Preface by Will McMahon
Acknowledgements
Introduction: A Very British Corruption - David Whyte
Part I: Neoliberalism and Corruption
1. Moving Beyond a Narrow Definition of Corruption - David Beetham
2. The New Normal: Moral Economies in the ‘Age of Fraud’ - Jörg Wiegratz
3. Neoliberalism, Politics and Institutional Corruption: Against the ‘Institutional Malaise’ - David Miller
Part II: Corruption in Policing
4. Policed by Consent? The Myth and the Betrayal - Phil Scraton
5. Hillsborough: The Long Struggle to Expose Police Corruption - Sheila Coleman
6. Justice Denied: Police Accountability and the Killing of Mark Duggan - Joanna Gilmore and Waqas Tufail
Part III: Corruption in Government and Public Institutions
7. British State Torture: From ‘Search and Try’ to ‘Hide and Lie’ - Paul O’Connor
8. The Return of the Repressed: Secrets, Lies, Denial and ‘Historical’ Institutional Child Sexual Abuse Scandals - Chris Greer and Eugene McLaughlin
9. Politics, Government and Corruption: The Case of the Private Finance Initiative - Michael Mair and Paul Jones
10. Revolving-Door Politics and Corruption - Stuart Wilks-Heeg
Part IV: Corruption in Finance and the Corporate Sector
11. On Her Majesty's Secrecy Service - John Christensen
12. Accounting for Corruption in the ‘Big Four’ Accountancy Firms - Prem Sikka
13. Corporate Theft and Impunity in Financial Services - Steve Tombs
14. High Pay and Corruption - Luke Hildyard
List of Contributors
Index

Looking at the public sector, big business and the police, David Whyte, editor of How Corrupt is Britain?, explores the nature of corruption in Britain, and how it affects our most venerated institutions.

END_OF_DOCUMENT_TOKEN_TO_BE_REPLACED

David Whyte, editor of How Corrupt is Britain? exposes the large-scale corruption at the heart of the British finance sector.

END_OF_DOCUMENT_TOKEN_TO_BE_REPLACED
Back to Top
X