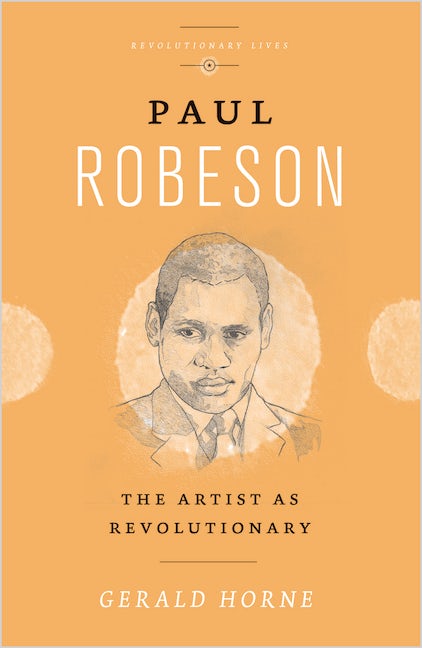 The Artist as Revolutionary

A biography of one of the most important political activists of a generation
A world-famous singer and actor, a trained lawyer, an early star of American professional football and a polyglot who spoke over a dozen languages. These could be the crowning achievements of a life well-lived, yet for Paul Robeson the higher calling of social justice led him to abandon both the NFL and Hollywood and become one of the most important political activists of his generation - battling both Jim Crow and Joseph McCarthy.

Gerald Horne's biography uses Robeson's remarkable and revolutionary life to tell the story of the 20th century's great political struggles: against racism, against colonialism, and for international socialism. This critical and searching account provides an opportunity for readers to comprehend the triumphs and tragedies of the revolutionary progressive movement of which Robeson was not just a part, but, perhaps, its most resonant symbol.

Gerald Horne holds the John J. and Rebecca Moores Chair of History and African American Studies at the University of Houston. He has published more than 30 books including The Counter-Revolution of 1776: Slave Resistance and the Origins of the USA (NYU Press, 2014) and Black Revolutionary: William Patterson and the Globalization of the African American Freedom Struggle (University of Illinois Press, 2013).

'Gerald Horne is one of the most gifted and insightful historians on racial matters of his generation' - Manning Marable 'Gerald Horne gives us the Paul Robeson we've been waiting for: the flesh and blood revolutionary, artistic genius, and fearless opponent of capitalism, racism and colonialism. He recovers in meticulous scholarly detail one of the 20th century's greatest freedom fighters. Horne also brings Robeson to life for our own times. This is a brilliant encore for an essential revolutionary life' - Bill V. Mullen, Professor of American Studies, Purdue University, and author of 'Afro-Orientalism' (Univ. of Minnesota Press, 2014) 'Powerfully affirms that Robeson's global artistic acclaim infuriated defenders of U.S. foreign policy while giving voice to earlier and later generations of black socialist radical artists. Horne portrays the tragedies faced by, and the impact possible for politically conscious black artists in the face of racial caricature and American imperialism. Drawing attention to Robeson's oratory this study reflects the cultivation of debate, law, and linguistics in Black cultural life and the role of Robeson's universalist musicology' - Tiffany Willougby-Herard, Associate Professor, African American Studies, UC Irvine, and author of 'Waste of a White Skin; 'A fine introduction to the man, his work and more importantly his ideas. A valuable work that clarifies the distinction between genuine fame and the simple vacuous celebrity obsessions of our time' - Billy Woodberry, leading director of the L.A. Rebellion (Los Angeles School of Black Filmmakers) 'An original and powerful biography of Paul Robeson. This book would have made Robeson proud' - Erik S. McDuffie, Associate Professor of African American Studies, University of Illinois, and author of Sojourning for Freedom: Black Women, American Communism, and the Making of Black Left Feminism 'In this powerful, concise account of one of the greatest internationalists of the 20th century, Gerald Horne returns Paul Robeson to his rightful place in history' - Robin D.G. Kelley, Distinguished Professor of History, UCLA, and author of 'Thelonious Monk: The Life and Times of an American Original' (2009) 'Horne delivers a fine, taut analysis of the great African American athlete, singer, actor, and political activist, highlighting the theme of the artist as revolutionary ... A welcome addition for any library, small or large' - Choice, Highly Recommended R. C. Cottrell, California State University 'An amazing contribution to African American radical history ... I hope a new generation of activists read Horne's insightful book' - Tony Pecinovsky, People's World 'Excellent' - Sydney Review of Books 'Offers a great example of black entertainers as responsible and ethical political leaders' - LSE Review of Books
1. 'The Best Known American in the World'
2. Rising Star
3. Rising Revolutionary
4. From Moscow to Madrid
5. 'The Tallest Tree in Our Forest'
6. 'Black Stalin'?
7. Robeson: Primary Victim of the 'Blacklist'
8. Britain Beckons
9. Triumph—and Tragedy
10. Death of a Revolutionary
Notes
Index

END_OF_DOCUMENT_TOKEN_TO_BE_REPLACED
Back to Top
X