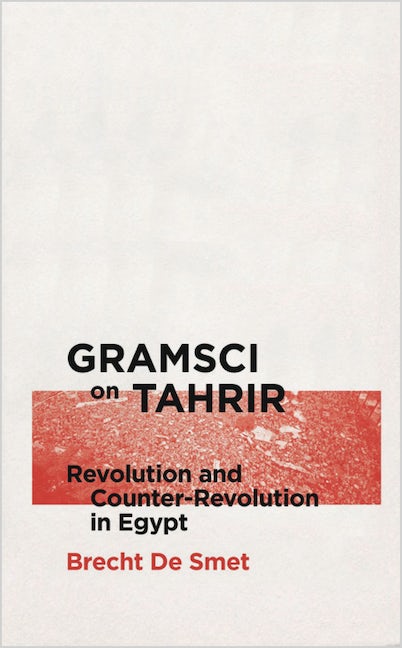 Central to De Smet's argument is Gramsci's interpretation of 'Caesarism', an occasion in which two evenly matched political opponents reach a potentially catastrophic stalemate; such an interplay between these forces can only end in mutual destruction. In applying this to the Egyptian revolution, we see how the Egyptian state was bereft of strong hegemonies and the people were replete with capable counter-hegemonies. Through this analysis, we can see how the current situation in Egypt demonstrates how both national histories and global power relations enable, define and displace popular resistance and social transformation.

Brecht De Smet is a lecturer and researcher at the Department of Conflict and Development Studies, Ghent University. Since 2008 he has been studying strike movements and political protests in Egypt from a Marxist perspective. De Smet is the author of several academic articles and opinion pieces about the workers' movement in Egypt. He is the author of Gramsci on Tahrir (Pluto, 2016) and A Dialectical Pedagogy of Revolt. Gramsci, Vygotsky, and the Egyptian Revolution (Brill, 2015).

'An important contribution to debates which should concern us all as researchers and students of potential revolutionary transformation, of Egyptian politics and of Gramsci's political thought' - Dr. Maha Abdelrahman, Reader in Development Studies and Middle East Politics, University of Cambridge, and author of 'Egypt's Long Revolution: Protest Movements and Uprisings' (Routledge, 2014) 'A wide-ranging and innovative work that will be of invaluable use to scholars of the Middle East, revolution, and 'democratic transition' and the use of Gramscian political concepts in global political economy' - Dr. Jamie Allinson, Lecturer in International Relations, University of Edinburgh, and Editor at 'Salvage' 'This is undoubtedly one of the most interesting and provocative analyses of not only the recent Egyptian revolution' - Progress in Political Economy
Series Preface
Acknowledgements
Abbreviations
1. Introduction
Part I: On the Subject of Revolution
2. From Bourgeois to Permanent Revolution
3. A Criterion for Interpretation
4. Caesarism
Part II: Gramsci in Egypt
5. Passive Revolution and Imperialism
6. Lineages of Egyptian Caesarism
7. The 25 January Revolution
8. Revolution and Restoration
9. Conclusions
Notes
Bibliography
Index

Brecht de Smet, author of Gramsci on Tahrir, considers the absence of transformation in the years that have followed the ‘Arab Spring’ in Egypt.

Antonio Gramsci died 80 years ago, to celebrate his life and work Michele Filippini dissects the evolving function of Gramsci’s thought.

We present our Gramsci Reading List, celebrating the work of Antonio Gramsci. Regarded as one of the most significant Marxists of the twentieth century, he merits inclusion in any register of classical social theorists.

END_OF_DOCUMENT_TOKEN_TO_BE_REPLACED
Back to Top
X