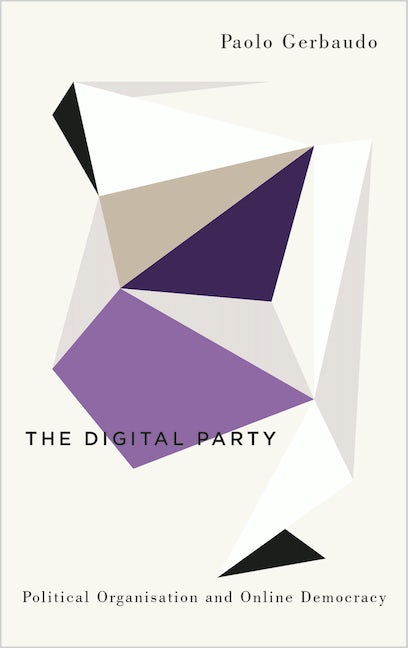 How political parties have changed in the age of social media.
From the Five Star Movement to Podemos, from the Pirate Parties to La France Insoumise, from the movements behind Bernie Sanders to those backing Jeremy Corbyn, the last decade has witnessed the rise of a new blueprint for political organisation: the digital party.

Paolo Gerbaudo addresses the organisational revolution that is transforming political parties in the time of Facebook, Twitter, Instagram, and Cambridge Analytica. Drawing on interviews with political leaders and organisers, Gerbaudo demonstrates that besides rapidly growing in votes, these formations have also revitalised party democracy, involving hundreds of thousands in discussions carried out on online decision-making platforms. Participatory, yet plebiscitarian, open and democratic, yet dominated by charismatic 'hyperleaders', digital parties display both great potentials and risks for the development of new forms of mass participation in an era of growing inequality. All political parties will have to reckon with the lessons of the digital party.

'In this refreshing, imaginative and conceptually sophisticated book, Paolo Gerbaudo takes us on a compelling journey across Europe to understand the digitally native political parties at the forefront of a profound process of organizational evolution. Gerbaudo convincingly explains the positive and negative implications of this process, and why it matters for the future of democracy' - Andrew Chadwick, author of 'The Hybrid Media System: Politics and Power' 'In a historic moment when political parties are losing their capacity to represent citizens, new party models have grown and often achieved unexpected success. This book is an important contribution to the conceptualization of digital parties and the understanding of their evolution' - Donatella Della Porta, Dean of the Institute for Humanities and the Social Sciences, Scuola Normale Superiore and author of 'Movement Parties in Times of Austerity' 'With a rare mix of narrative flair and analytical insight, Gerbaudo tells the riveting story of how tech-savvy leaders and 'connected outsiders' have reshaped politics in the digital era' - John Postill, author of 'The Rise of Nerd Politics' 'Paolo Gerbaudo shows how the internet shapes contemporary politics and vice versa. A must read for everyone interested in digital politics' - Christian Fuchs, author of 'Digital Demagogues: Authoritarian Capitalism in the Age of Trump and Twitter' 'Gerbaudo shows how technology-based "platform parties" are designed, how they fit into the history of political parties, and how they reflect changes in politics, society, economics, and communication. This rich analysis looks at both the promise and the limitations of these fascinating political experiments' - Lance Bennett, University of Washington 'This book by Paolo Gerbaudo goes deep into the "morbid" crossroads of our present and offers us suggestive ideas on the key elements of its emerging political practice. A brilliant work' - German Cano, University of Alcala de Henares, member of the founding group of Podemos 'A wide-ranging, and international, survey of those parties that have gone furthest to embrace the organisational changes the new modes of communication demand of us all and as such is a compelling read for the future of politics' - Philosophy Football
Series Preface
Acknowledgements
Introduction
1. The Party Strikes Back
2. The People of the Web
3. When the Party Mimics Facebook
4. Participationism
5. Death of the Party Cadre
6. Coding Democracy
7. Plebiscitarianism 2.0
8. The Hyperleader
9. The Superbase
Conclusion
Appendix
Notes
Bibliography
Index
Published by Pluto Press in Dec 2018
Paperback ISBN: 9780745335797
eBook ISBN: 9781786803610

Momentum, Labour and the Rise of the Platform Party

END_OF_DOCUMENT_TOKEN_TO_BE_REPLACED
Back to Top
X