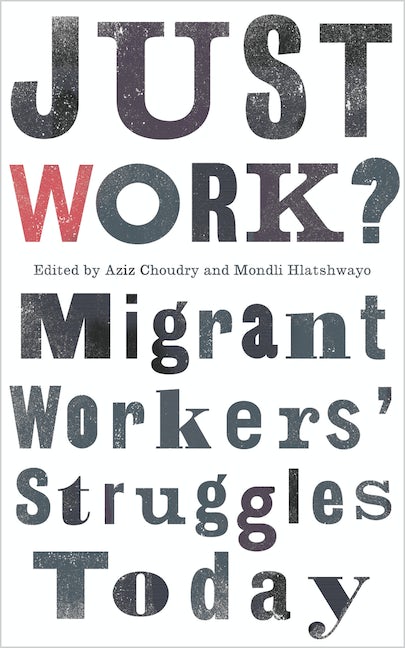 This global volume explores migration, precarious employment, transformation of paid work and the political actions of immigrant and migrant workers.
This book offers a vast range of grassroots perspectives on global migrant labour organisation in the twenty-first century. From workers' organisations in South African migrant worker resistance in the Gulf, from forest workers in the Czech Republic to domestic workers' structures in Hong Kong, this book brings together a wealth of lived experiences and hidden struggles for the first time.

Highlighting the changing nature of frontline struggles against exploitation, Just Work? shows that migrant workers are finding new and innovative ways of resisting neoliberal immigration measures as they are forced to fight against the precarious nature of jobs from both within and outside of traditional forms of labour organisations. With contributions from scholars and activists from around the world engaged in this resistance, this will be an accessible collection based on grassroots experiences, placed in a political economy framework.

Aziz Choudry was Associate Professor and Canada Research Chair in Social Movement Learning and Knowledge Production in the Department of Integrated Studies in Education, McGill University, and Visiting Professor at the Centre for Education Rights and Transformation (CERT), University of Johannesburg. He is editor of The University and Social Justice, Activists and the Surveillance State and Just Work? Migrant Workers' Struggles Today (Pluto, 2020, 2019, 2016).

Mondli Hlatshwayo is a senior lecturer in the Centre for Education Rights and Transformation at the University of Johannesburg. He is the co-editor of Just Work? (Pluto, 2015).

'A distinctive and original collection' - Mark Thomas, Associate Professor, Department of Sociology, York University 'Timely and provocative ... a smart and original contribution ... [a] unique combination of theory and illustrative case studies' - Samia Botmeh, Assistant Professor in Economics, Birzeit University, Palestine 'The combination of academic scholarship and activist authorship in the book provides unique insights, and gives those who are often nameless and voiceless an identity and voice' - Linda Cooper, Associate Professor, Adult Education, School of Education,University of Cape Town 'This collaboration with some of the most creative like-minded thinkers from across the globe is extremely important. As labour migrancy and xenophobia are both amplified during the current stage of capitalist crisis, leaving so many more people vulnerable to super-exploitation, this book is badly needed.' - Patrick Bond, professor of political economy, University of the Witwatersrand, Johannesburg 'A fascinating read and a welcome antidote to migration scholarship that continues to disproportionately obsess over the West' - LSE Review of Books
Acknowledgements
List of Abbreviations
1. Just Work? Migrant Workers, Capitalist Globalisation and Resistance - Aziz Choudry and Mondli Hlatshwayo
Part I: Africa and the Middle East
2. Xenophobia, Resilience and Resistance of Immigrant Workers in South Africa: Collective and Individual Responses - Mondli Hlatshwayo
3. States of Exclusion: Migrant Work in the Gulf Arab States - Adam Hanieh
4. Undocumented Migrant Workers in Nigeria: Labouring in the Shadows of Regional Integration - Baba Ayelabola
Part II: Europe
5. Migrant Rights Activism and the Tree Workers Case in the Czech Republic - Marek an k
6. Towards a History of the Latin American Workers Association 2002–12 - Jake Lagnado
7. Lessons from Migrant Workers’ Organisation and Mobilisation in Switzerland - Vasco Pedrina
Part III: Asia and the Pacific
8. Migrant Unionism in Hong Kong: A Case Study of Experiences of Foreign Domestic Workers in Union Organising - Asia Pacific Mission for Migrants
9. The Possibilities and Limitations of Organising Immigrant Workers in Japan: The Case of the Local Union of the All-Japan Metal and Information Machinery Workers’ Union - Hiroshi Ueki
10. Disaster Capitalism and Migrant Worker Organising in Aotearoa/New Zealand - Edward Miller and Dennis Maga
Part IV: North America
11. Migrante, Abante: Building Filipino Migrant Worker Leadership through Participatory Action Research - Valerie Francisco
12. Temporary Employment Agency Workers in Montreal: Immigrant and Migrant Workers’ Struggles in Canada - Aziz Choudry and Mostafa Henaway
Contributor Biographies
Index
Published by Pluto Press in Dec 2015
Paperback ISBN: 9780745335834
eBook ISBN: 9781783713400

END_OF_DOCUMENT_TOKEN_TO_BE_REPLACED
Back to Top
X