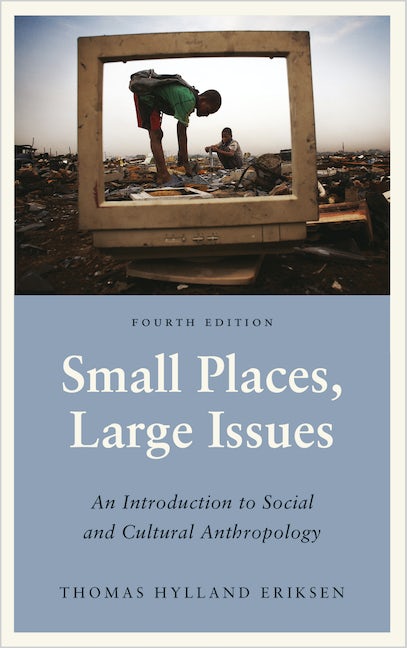 An Introduction to Social and Cultural Anthropology

Presenting a clear overview of anthropology, it focuses on central topics such as kinship, ethnicity, ritual and political systems, offering a wealth of examples that demonstrate the enormous scope of anthropology and the importance of a comparative perspective. Unlike other texts on the subject, Small Places, Large Issues incorporates the anthropology of complex modern societies. Using reviews of key works to illustrate his argument, Thomas Hylland Eriksen's lucid and accessible overview remains an established introductory text in anthropology.

This fourth edition is updated throughout and increases the emphasis on the interdependence of human worlds. It incorporates recent debates and controversies, ranging from globalisation and migration research to problems of cultural translation, and discusses the challenges of interdisciplinarity in a lucid way.

Authoritative, challenging, accessible, up-to-date, this is a splendid introduction to modern social anthropology. I would press it on anyone who wants a better grasp of the diversity of human ways of living. And it is a must-read for students. - Adam Kuper, Centennial Professor of Anthropology, London School of Economics This classic volume is quite simply the best introduction there is to social and cultural anthropology. Deeply grounded in the history of anthropological thought, it is also thoroughly up to date. More than that, it is unfailingly engaging, clear and accurate. There is no better place to go to begin to learn why anthropology has been and remains a vital discipline in the contemporary world. - Joel Robbins, Sigrid Rausing Professor of Social Anthropology, University of Cambridge Small Places, Large Issues shows us Thomas Hylland Eriksen in his admirable triple capacity as an anthropologist: the scholar, with depth and breadth of knowledge, and with a critical sense; the statesman, negotiating with fairness between anthropological camps; and the journalist, with a sense of what is new, zooming between close-up and Big Picture, and writing clearly about it all. - Ulf Hannerz This wonderfully lucid introduction to social and cultural anthropology readily captures students' attention. By delineating the past and present development of the discipline, Eriksen underscores continuities and challenges that inform the practice of anthropology in today's world. In presenting anthropology as a means for elucidating large issues through the analysis of small places, the book speaks eloquently to anthropology's intellectual vibrance and practical value. - Noel Dyck, Professor of Social Anthropology, Simon Fraser University
Series Preface
Preface to the Fourth Edition
1. Anthropology: Comparison and Context
2. A Brief History of Anthropology
3. Fieldwork and Ethnography
4. The Social Person
5. Local Organisation
6. Person and Society
7. Kinship as Descent
8. Marriage and Relatedness
9. Gender and Age
10. Caste and Class
11. Politics and Power
12. Exchange and Consumption
13. Production, Nature and Technology
14. Religion and Ritual
15. Language and Cognition
16. Complexity and Change
17. Ethnicity
18. Nationalism and Minorities
19. Anthropology and the Paradoxes of Globalisation
20. Public Anthropology
Epilogue: Making Anthropology Matter
Bibliography
Index
Published by Pluto Press in Aug 2015
Paperback ISBN: 9780745335933
eBook ISBN: 9781783715183