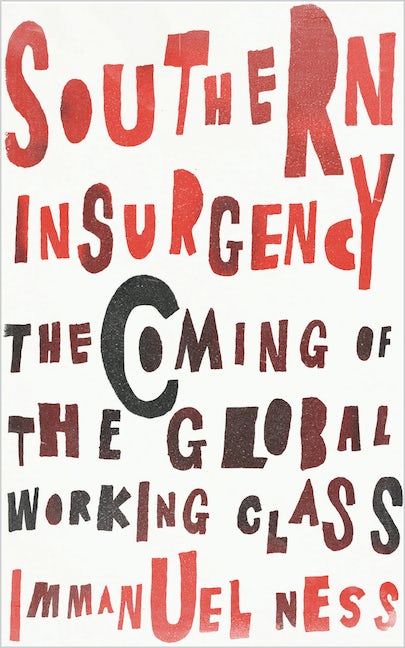 A book on the nature of the new, precarious industrial worker in the Global South - highlighting experimentation, solidarity and struggle.
The site of industrial struggle is shifting. Across the Global South, peasant communities are forced off the land to live and work in harsh and impoverished conditions. Inevitably, new methods of combating the spread of industrial capitalism are evolving in ambitious, militant and creative ways. This is the first book to theorise and examine the present and future shape of global class struggles.

'The first book to theorise and examine the present and future shape of global class struggles. Analytically brilliant and empirically sound ... a superb portrait of the trajectory of the independent workers' struggle' - Sushovan Dhar, New Trade Union Initiative, India. 'Offers insights on global labour struggles in an era when familiar unions seem exhausted, or at least too weak to make a concerted effort - with concrete examples of workers forming independent unions in the Global South' - Paul Buhle, historian and author 'Essential reading for anyone who wants to understand the present form of militant unionism in the Global South' - Gregory Wilpert, director of TeleSUR English 'Seminal and distinctive' - Arup Kumar Sen, Associate Professor, Serampore College, West Bengal, India. 'Richly reports a qualitatively different practice evolving in India, China, and South Africa. It is horizontal rather than vertical. At this living moment all over our globe, workers are reaching out hands, first to their workmates, then to other workers everywhere' - Staughton Lynd, historian, author, activist 'Provides the most crucial case studies of alternative worker organising in the major centres of industrial production in China, India, and South Africa - where workers recognise their power and act to end exploitation' - May Wong, Globalization Monitor, Hong Kong 'Tells us how democratic forms of worker organisation can overcome the limitations of conventional labour unions and challenge global capitalist exploitation' - Lee Chun Wing, Hong Kong Polytechnic University 'Illuminates the most important questions of our time: can the democratic and transformative currents which inspired the movements of the past re-emerge today?' - Frances Fox Piven, City University of New York Graduate Center 'Provides dramatic case studies of worker resistance to corporate exploitation and state violence, through the formation of militant organisations in factories and within their communities' - Bill Fletcher, Jr., Author of Solidarity Divided and syndicated columnist 'This book will throw challenges to the conventional economics of collective bargaining' - Debdas Banerjee, Author: Labour, Globalization and the State, Professor, Centre for Development Studies, Central University of Bihar
List of Maps, Figures and Tables
Preface and Acknowledgements
1. Introduction: The New International Working Class
Part I: Capitalism and Imperialism
2. The Industrial Proletariat of the Global South
3. Migration and the Reserve Army of Labor
Part II: Case Studies
4. India: Neoliberal Industrialization, Class Formation and Mobilization
5. China: State Capitalism, Foreign Investment and Worker Insurgency
6. South Africa: Post-Apartheid Labor Militancy in the Mining Sector
Conclusion
Notes
Index
Published by Pluto Press in Oct 2015
Paperback ISBN: 9780745335995
eBook ISBN: 9781783717095

Pluto Press caught up with Immanuel Ness, to examine the present and future shape of global class struggles and discuss his book Southern Insurgency: The Coming of the Global Working Class.

END_OF_DOCUMENT_TOKEN_TO_BE_REPLACED
Back to Top
X