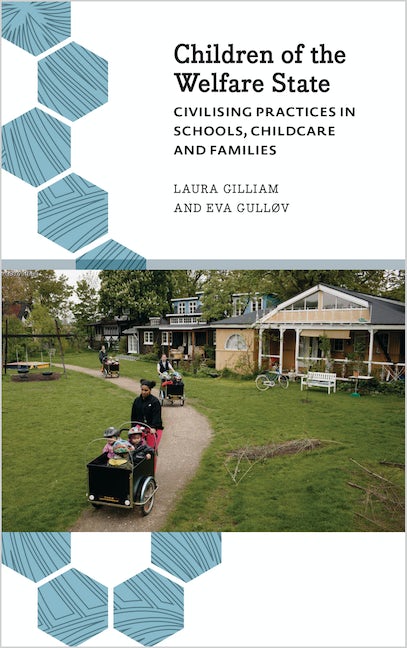 Children of the Welfare State

by Laura Gilliam and Eva Gullov

As part of a general discussion on civilising projects and the role of state institutions, the authors focus on Denmark, a country characterised by the extent of time children use in public institutions from an early age. They look at the extraordinary amount of attention and effort put into the process of upbringing by the state, as well as the widespread co-operation in this by parents across the social spectrum.

Taking as its point of departure the sociologist Norbert Elias’ concept of civilising, Children of the Welfare State explores the ideals of civilised conduct expressed through institutional upbringing and examine how children of different age, gender, ethnicity and social backgrounds experience and react to these norms and efforts. The analysis demonstrates that welfare state institutions, though characterised by a strong egalitarian ideal, create distinctions between social groups, teach children about moral hierarchies in society and prompts them to identify as more or less civilised citizens of the state.

Laura Gilliam is Associate Professor in the Department of Educational Anthropology, School of Education, at the University of Aarhus, Denmark. She is the co-author of Children of the Welfare State (Pluto, 2016).

'This detailed empirical study of how Danish children are brought up, or 'civilised' - whether within families or public institutions - is a major contribution to our understanding of Scandinavian welfare states, a powerful argument for the role of ethnography in comparative policy debates, and a must-read for anyone interested in childhood' - Richard Jenkins, Emeritus Professor of Sociology, University of Sheffield 'Makes a valuable contribution to the anthropological study of childhood' - Peace News
Series Preface
Acknowledgements
Introduction
1. On Civilising: A Perspective on Childrearing, Conduct and Distinctions
2. Society’s Children: Institutionalisation and Changing Perceptions of Children and Upbringing
3. Civilising the Youngest: An Ambiguous Endeavour
4. The Not-Yet-Civilised: Negotiating the Kindergarten’s Civilising Project - Karen Fog Olwig
5. Social Children and Good Classes: Moulding Civilised Communities during the First Year of School
6. The Impossible Bilingual Boys: Civilising Efforts and Oppositional Forms in a Multi-Ethnic Class
7. The Decent Citizens: Lessons on Moral Superiority and the Immorality of Wealth in a Class of Privileged Youth
8. The Civilised Family Life: Childrearing in Affluent Families - Dil Bach
9. Civilising Institutions: Cultural Norms and Social Consequences
Notes
References
Index
Published by Pluto Press in Dec 2016
Paperback ISBN: 9780745336046
eBook ISBN: 9781786800176